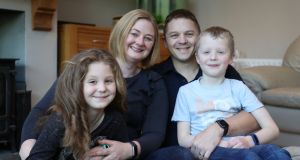 Jenni Barnes lives in Greystones with her husband, Andy, and their children, Alana (9) and Zach (7). Alana has type 1 diabetes and coeliac disease.

“Alana was diagnosed when she was two,” Jenni explains. “I’d just gone back to work. She was acting out, very moody, but we put that down to me going back to work. We were noticing some signs – she was really thirsty, going to the toilet a lot, and it all happened quite quickly over a week.

“I remember even during the week waking up during the night and googling symptoms of diabetes and trying to convince myself that she didn’t have it, but I think both of us had a gut feeling.”

Jenni says she was “heartbroken” on diagnosis because “this was a disease for life. We knew we’d need to inject her daily. It was a really steep learning curve for me in particular. I never realised the extent of the management. There was an awful lot of learning that we had to do as well as deal with the emotional side of the diagnosis.

“It’s also different looking after a child,” Jenni adds. “She was only two so she wasn’t of the age to let us know how she was feeling. Our biggest fear was she actually didn’t like sugary drinks and stuff. A low blood sugar has to be treated immediately with sugar. That’s an emergency situation.”

The early weeks and months were similar to “having a newborn”, Jenni says. “There’s a lot of broken sleep as you’d have to test her sugars during the night to see how her body reacted to the insulin”, but things improved a little when Alana was prioritised for an insulin pump because of her age.

Jenni’s day revolves around constant calculating of carbs and appropriate insulin doses for Alana. “It’s not just food affects her blood sugars – exercise, if she goes through a growth spurt, anything hormonal really, if she’s a cold coming on. Even the time of day affects her blood sugar. That first meal she has, she needs a lot more insulin than other meals.”

The joking that surrounds diabetes, “don’t eat to many Mars bars, you’ll get diabetes” contributes to trivialising the disease, Jenni believes. “We do get the impression from some people that it’s not a big deal, but the reality is if we don’t manage this disease properly she could die, or have serious complications. It has to be managed 24/7.

The extent of management involved in having a child with diabetes led Jenni to her decision to resign from work.

“It was a hard decision. The decision was taken away from me by life circumstance. I’d only been in the job for maybe three or four weeks. I was just starting to settle in and enjoy being back at work.

When you have something going on in your family that other people don’t, it is lonely

“It was very hard emotionally on me, but all my time and energy was taken up in trying to manage this condition and get used to the idea that my child has this chronic illness that potentially could be life threatening. I missed the adult company. I missed earning my own money.

“I think when you have something going on in your family that other people don’t, it is lonely. Sometimes you just want to talk to someone about what it’s like to have to do these things for your child all the time – all the extra considerations.”

Read: You are always on high alert