Every family is affected by cancer – in mine, genetics played a huge, tragic part 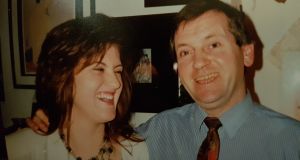 Arlene and her Dad, Aidan O’Beirne

Everyone is affected by cancer, as we all know someone who has had it. Monday, February 4th, was World Cancer Day – an annual international event to raise awareness of the signs, symptoms, treatment and prevention of the many different forms of cancer.

Through my work as a journalist I have spoken to many people who have survived the disease, and others who have lost loved ones – cancer doesn’t discriminate and no one, young or old, is immune to its far-reaching grasp.

But while living a healthy lifestyle with plenty of exercise, a good diet, no cigarettes and a low intake of alcohol will do much to reduce your risk, genetics also has a part to play with 5-10 per cent of people being pre-disposed to cancer.

Like many, I have first-hand experience. Almost four years ago my beloved dad was diagnosed with pancreatic cancer at the age of 68 and died just two months later.

It was a shocking bolt out of the blue as he had no symptoms until a few months previously and, even then, those were vague and could easily have been passed off as irritable bowel syndrome or some minor stomach disorder.

Just over a year later, his youngest sister was diagnosed with the same strain of the disease and, only in her mid-50s, died just over a month later.

For cancer to strike twice in the same family is extremely bad luck, but these two siblings were just its latest victims.

My paternal grandfather died when I was very young, also from pancreatic cancer, and my grandmother from the same when she was in her mid-70s. I didn’t really know my grandfather, but was very close to my granny and was devastated when she died just a few weeks after diagnosis.

I’m no genetic specialist, but the fact that both of my paternal grandparents died from the same cancer, must have had a bearing on the untimely demise of their children in later years.

When she was 60, my father’s eldest sister also lost her life to cancer – hers originated in the digestive system, but experts have since told us this could have been a similar strain. His brother died from an unrelated cancer, also aged 60.

Perhaps most tragically, years earlier, my dad’s second youngest sister Carmel, who was full of fun, life and laughter, died in her 30s of cervical cancer, leaving behind a heartbroken husband and three- year-old daughter.

This is just one example of how the disease can obliterate a family such as my father’s which started off as two parents and seven children and, over the course of a few decades, all but two lost their lives to cancer.

It makes for bleak reading but I’m sure this isn’t a unique situation and it does make me hyper-aware of the need to watch out for signs and symptoms both in myself, my siblings and my own children.

I know my chances of developing the disease are probably higher than someone with no cancer in their family.

If I have a suspicious lump or a feeling that something isn’t quite right, I will get it checked out – that’s what doctors are there for. Of course, it’s most likely to be nothing, but what if it wasn’t? If I were to ignore symptoms which were similar to irritable bowel syndrome because I didn’t want to bother my doctor, then, given my family history, I might not be here this time next year.

On the one hand, our medics don’t want us turning into hypochondriacs clogging up their waiting rooms with every scratch, ache or pain, but I’ve heard of many people who avoid making an appointment as they “feel silly if it turns out to be nothing”.

Ireland has the third highest cancer rate in the world – just behind Australia and New Zealand – so it’s vital we are all aware of the telltale signs that something is wrong and the lifestyle changes we can make to reduce our risk.

Of course, some people will develop the disease for no apparent reason.

But if making a few healthy changes can help protect us from being a victim of cancer, then, despite already being one month into the new year, helping to reduce our cancer risk should be our number one resolution for 2019.

This year for World Cancer Day, the Irish Cancer Prevention Network is focusing on physical activity and aims to raise awareness that physical activity reduces our risk of getting cancer and can enhance living with and beyond cancer.

Kevin O’Hagan, cancer prevention manager with the Irish Cancer Society (ICS), says recent research from the National Cancer Registry Ireland (NCRI) showed that cancer figures could almost double by 2045. But while the projections are stark, they need not become a reality.

“Four in 10 cancers are preventable by improving our lifestyles and availing of free screening. By making changes like eating healthily, exercising, limiting our alcohol intake and quitting smoking, each of us can dramatically reduce our risk of getting cancer.”

Dr Robert O’Connor, head of research for the ICS, says while the number of people affected by the disease will continue to rise due to people living longer and the impact of lifestyle issues, research continues to provide improvements in outcome.

“In Ireland more than six out of 10 people diagnosed with cancer will survive at least five years and that survival rate continues to improve by 1.5 per cent per year,” he says. “Research in Ireland broadly breaks down into four ways to impact cancer outcome.”

- Prevention: Better knowledge of the causes (including behavioural) allows us to reduce our risk of getting a cancer.

- Early detection: We have three free and proven methods of screening (breast, bowel and cervix) which allows early cancers and pre-cancers to be detected and easily removed before they can become life threatening. Research now suggests that we may be able to reduce lung-cancer risk by screening high-risk individuals with X-ray diagnostics.

- Treatment and diagnostics: Advances are emerging that hold the promise of better individualisation of treatment to give improvements in outcome.

- Survivorship: We know that better co-ordination of care and lifestyle advice can improve the chances of a good outcome after treatment. And Irish researchers are contributing important findings in each of these areas.

Dr O’Connor adds: “Notwithstanding these improvements, the survival rates from certain cancers, including pancreatic, ovarian and brain, have not improved at the same rates as certain other cancers. This reflects the individual nature of the different forms of cancer and the fact that advances in one field, breast for example, do not translate across all forms of the disease.

“Research in these areas includes tools to better and earlier detect and diagnose these conditions, where there is likely better opportunity for curative treatment, as well as more detailed analysis of the molecular causes of these diseases to drive more targeted treatment approaches.”

World Cancer Day aims to save millions of preventable deaths each year by raising awareness and education about cancer and urging people across the world to take action against the disease.