More power to cyclists as sales of ebikes gather speed 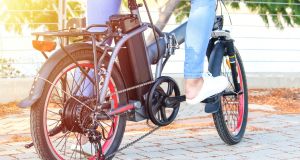 In 1881, French engineer Gustave Trouvé attached an electric motor to a British tricycle made by the Starley company of Coventry . . . and the electric bike (ebike) was born.

Ebikes are propelled by pedal power allied to battery-powered, emission-free electric motors, a combination that offers more mobility to older and/or less physically-fit riders than that offered by traditional bikes.

It took until the mid-1990s for global ebike production to get into gear, but by 2013 there were over 200 million ebikes in China and, according to Persistence Market Research, the global ebike market is expected to grow by 4.7 per cent between 2017 and 2022, reaching a market value of US $19 billion.

In Ireland, John Hurley of ErgoPro eBikes notes a surge in bike use, with an ebike knock-on effect. “Ireland’s Central Statistics Office figures showed an increase of 43 per cent between 2011 and 2016 among workers cycling to work. the Bike to Work scheme has encouraged this – currently we’re on track to reach the peak figures of 1986 when 60,000-plus cycled to work.”

According to Kilkenny-based Ebikes Ireland, “in the last 12 to 18 months interest in, and sales of, ebikes has greatly increased here”.

With initiatives such as Greenways promoting cycling for leisure, Hurley considers them an ideal way to introduce children to safe cycling and to reintroduce some “retired” cyclists: “These scenic routes are a hive of activity, and the ebike features well here, levelling the playing field for the less fit who don’t want to hold back the budding cyclists of the future.”

A three-year analysis of 31 Canadian university students’ use of ebikes found most used them for commuting, mainly during the summer, and the study authors, writing in the Journal of Advanced Transportation, suggested that “ebike manufacturers should target sales to non-bike users, such as seniors, rather than trying to displace sales of regular bicycles”.

Ebike use confers health benefits, especially among those who might not be inclined to take up traditional cycling. For example, in 2011 the journal Medicine & Science in Sports & Exercise published a Swiss study which found that ebikes could help “sedentary people commute to work and meet physical activity guidelines. Subjects appreciated ease of use and mild effort needed to activate the engine support climbing hills, without the need to shower at work. Ebikes can be promoted in a challenging urban environment to promote physical activity and mitigate pollution issues.”

Among older age groups, who might be expected to use an ebike, a Belgian study of 1,146 Flemish participants (average age 72 years), published in 2018 in Medicine & Science in Sports & Exercise, found that it was “women, those with a higher body-mass index, and those with one (compared with no) motorised vehicle in the household had higher odds of being an ebike user”.

The researchers also said of their finding that women were more likely to be ebike users than men and that it “is promising because women are at increased risk for physical inactivity, and Flemish older women are less likely to cycle compared with men”.

Depending on the battery capacity and type of charger, recharging times range from two to five hours

Apart from ebikes conferring general health benefits, specific patient groups can be helped. For example, in 2018 the journal Diabetic Medicine published the “Potential of electric bicycles to improve the health of people with Type 2 diabetes: a feasibility study” from Bristol University researchers who recruited 20 type-2 diabetic patients, who wore heart monitors and were provided with an ebike for 20 weeks. The study concluded that ecycling was “acceptable, could increase fitness and elicited a heart rate that may lead to improvements in cardiometabolic risk factors in this population. Electric bicycles have potential as a health-improving intervention in people with Type 2 diabetes.”

What about battery charging?

According to Ebikes Ireland: “Depending on the battery capacity and type of charger, recharging times range from two to five hours. Although factors such as level of power assist being used – whether flat or hilly terrain, weight of cyclist etc – most ebikes average between 50 and 100km per charge. There are many different manufacturers of ebike motors and batteries, including power systems from market leaders such as Bosch, Shimano and Yamaha. However, one of the most important factors when purchasing an ebike is to buy from a recognised dealer or bike shop offering a full parts and service back-up.”

Hurley says their ebikes weigh about 15kgs and have a 50km range: “The Samsung 36 V battery charges fully in 3.5 hours from a regular domestic plug. The bikes reach a maximum of 25km per hour, with a carry load of 120kgs. Already we have interest from the young high-tech city dwellers.”

The ebike era means that the health benefits of traditional cycling can be extended to include those who might need that extra bit of help, whether for recreation or commuting.