Why I love... dog walking

Helen Condon always enjoys a stroll with her dog Bailey 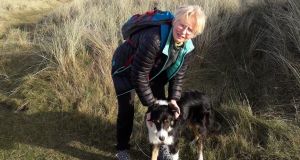 Helen Condon with her dog Bailey, who is very sociable

I’ve recently joined the ranks of the pet-owning community. A nine-week-old collie cross puppy from Dogs Trust came into our lives last summer and chaos has reigned ever since. Bailey is incredibly cute but after months of biting and chewing everything in sight, we questioned whether we could see a long-term future with this animal.

Now, this former bundle of fluff is a leggy black and white six-month-old with tan flecks, and one thing we all agree on is that getting outside for a walk is simply the best thing in the world. Bailey revels in the sheer freedom of the outdoors. Each time we venture out, we meet new pals of the four-legged and two-legged variety.

I’ve been amazed by some of these encounters. An American lady approached us in Glencree last week and asked if she could pet Bailey. I was trying to hold down the beast as he tried to lick the face off of her when I noticed that her eyes had filled up with tears. “I miss my own dog at home so much,” she told me.

As a newbie, I worry about him being off the lead in open areas so I generally take my cue from other dog owners. The experts say it’s important to allow dogs to socialise with as many other dogs and people as possible. That said, there are probably one or two people out there who don’t like dogs. Bailey doesn’t understand this. He loves everybody and not just his tail but his whole body wags as soon as he spots an approaching human. Our walks are now full of five-minute snatches of conversations with strangers and we both feel all the better for it.