Dr Muris Houston: I got the flu jab, and now I have flu 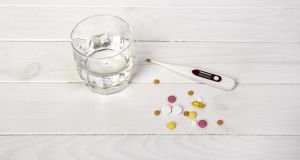 “Two paracetamol and a glass of water appeared. Left to consider this new diagnostic possibility, my first thought was, ‘but I’ve had the flu jab!’”

I’m writing this column under the influence. Not of drink, drugs or other substances that might pose a problem at a Garda checkpoint, but of influenza.

Although extraordinarily tired, I’m hoping to craft a reasonable piece through the mental fog of flu. (Note to Health and Family editor; please check carefully for bloopers as I’m not the sharpest instrument in the writing toolbox at present).

It started four days ago. Walking along the street, I thought for a moment I was being mugged. Some ne’er-do- well had given me a wallop with a solid instrument across the back of my neck. But looking around, there was no one there. Yet my legs were rubbery and I felt light-headed.

Heading home, the drive was interesting. My arm muscles were now complaining at the apparent lack of power-steering; and as the road signs were not registering with the usual immediacy, I felt obliged to drive more slowly than usual.

Falling in the door at home, Mrs H took one look at me and pointed towards the bedroom. Always a superior diagnostician, she was having none of my ‘I think I’ve been mugged’ effort at self-diagnosis.

“You look like a man who is coming down with flu”, she pronounced.

Despite my protestations, I was steered into bed. Two paracetamol and a glass of water appeared. Left to consider this new diagnostic possibility, my first thought was, ‘but I’ve had the flu jab!’

Admittedly a late vaccine recipient this flu season, my immune system nonetheless has had the time it needed to mount a reasonable immune response to this year’s most prevalent influenza virus.

Influenza A (H1N1) is the commonest variant identified by the National Virus Reference Laboratory from the specimens being sent to it by sentinel GP practices throughout the country. And Influenza A (H1N1) pdm09 , the variant circulating in Ireland at present, is one of the three component viruses in this year’s flu vaccine.

I’m also in one of the age groups the Health Protection Surveillance Centre (HPSC) says is most susceptible to this winter’s flu bug. And, unlike last year, the virus is leading to more hospital admissions for the under-fives.

In a paper just published in the Journal of the European Centre for Disease Prevention and Control (Eurosurveillance), Canadian scientists have shown that this year’s vaccine is especially effective: “in this interim analysis, the 2018/19 influenza vaccine is estimated to have reduced the risk of medically attended influenza A(H1N1)pdm09 illness in Canada by 72 per cent.

A reasonable interpretation of my flu dose is that its severity has been ameliorated by the benefits of the vaccine. However, it is important to nail one of the myths about immunisation – that me coming down with the flu has been caused by the vaccine.

Nor does my infection mean the vaccine was a complete waste of time. There is no way I could even attempt to write a column four days into a bout of flu had its severity not been blunted by an already primed immune system.

How can we be sure it is a flu bout and not the common cold?

The giveaways are the brutally sudden onset, the lack of runny eyes and nose, and the predominance of a sore throat and a dry cough over other respiratory symptoms. And of course the profound muscle soreness and fatigue.

“I opened the window and in-flew-enza” is a line in a skipping rhyme prompted by the 1918 flu pandemic. If I leave the window open, I wonder will my bug fly right out again?