Assertiveness is the cure for Irish 'disease to please' 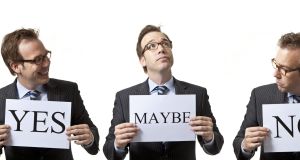 I rarely disagree with the opinions expressed by columnist Lucy Kellaway. In a recent column, “The sheer bliss of just saying no”, she wrote: “Yes can be said by any old fool, while no requires character, commitment and courage.” She referred to a number of new self-help books on assertiveness skills, including one by Laura Tong, The Life-Changing Power of No.

The truth is that most adults have difficulty saying yes as well as no. Saying yes assertively – which means saying it enthusiastically and without making the asker wait – is a skill that must be learned. In fact, Irish people generally find it hard to be assertive with family members, colleagues in the workplace, friends, neighbours and even strangers. Most adults find it daunting to complain in restaurants if the food or service is not up to scratch, and to stand up to health professionals.

People of all social classes and occupations have difficulty being assertive. When working as a health-promotion officer, I ran hundreds of assertiveness courses for women, men, teachers, priests, school inspectors, nurses, doctors, community groups – and Gay Byrne’s radio show. Regardless of age or occupation, participants in these courses all had difficulty saying yes and no.

Most attendees were also unable to express their feelings assertively, handle criticism or deal with conflict. Participants agreed that in most situations they behaved either aggressively (dominating others), or passively (being a doormat) instead of assertively, which means standing up for our own rights in a way that respects the rights and needs of others. Asking for what they wanted while acknowledging that the other person has the right to refuse was difficult for virtually everybody on the courses.

Adults have problems behaving assertively because they were not taught to be assertive when they were children. From the time they could talk they were told not to say no to their parents and other authority figures. Saying yes too enthusiastically was also frowned upon.

Learning to be unassertive continues in schools. Theoretically, children now learn assertiveness as part of the social, personal and health education (SPHE) programme, but this is often confined to teaching them to say no to alcohol, drugs and sex and to say yes to a healthy lifestyle.

Teachers are not good at teaching assertiveness because they are not assertive themselves. Many children learn to use manipulation (sulking) to get their own way, and this game-playing continues into adult relationships.

There is convincing evidence that assertiveness skills promote health, and lack of assertiveness leads to stress, anxiety, and mental health problems, or what Laura Tong calls “the disease to please” in The Life-Changing Power of No. Mental-health professionals often provide assertiveness training for their patients. Unfortunately, there are not enough of these desperately needed courses.

Assertiveness books have been around for about 40 years and have not made people more assertive, because assertiveness skills cannot be learned from a self-help book. They must be taught by trained facilitators using role play, where participants get a chance to practise the skills and receive feedback.

With the skill of saying no, for example, participants on these courses are often amazed to find that they do not actually use the word “no”. They think they have said no when they have actually obfuscated or made excuses.

In addition, saying no must be taught in the context of rights and needs. These rights include “I have the right to say yes and no for myself” and “I have the right to ask for what I want”. Refusal skills mean using the word no, saying it as soon as possible and then thanking the person for asking. Expressing feelings assertively involves identifying the feeling accurately and making an “I” statement such as “I feel afraid when you shout”. Do not use “you” statements such as “you make me feel afraid when you shout”.

Simple, maybe, but these skills need practice. Most assertiveness courses last about 20 hours, and participants’ health, especially mental health, will improve if they practise the skills in their everyday lives.

Assertiveness skills such as handling criticism, dealing with put-downs and conflict resolution are covered in Wellbeing through Groupwork: A Manual for Facilitators Who Are Promoting Health (HSE, 2004). My Bill of Rights from Anne Dickson’s A Woman in Your Own Right: Assertiveness and You (1982) is included. A free PDF version of the manual and hard copies are available fromhealthpromotion@hse.ie.

‘I felt safe in Korea. Returning home felt like a gamble’
5

Lavinia Kerwick: 'My life in my 20s and 30s was absolutely destroyed, taken away'
6

Loftus Hall: Spooky pile with a haunting history for €2.5m
8