Not #Fitspo on social media, but not #BodyPosi either

I’m one day in to a three-day regime and a bit tired, but that might be the 3am dancing 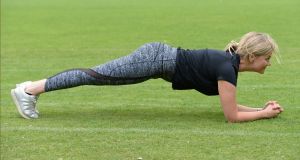 Dominique McMullan: ‘Apart from the mild hangover and the fish-oil burps, since starting this journey I feel better than I have in a long time.’ Photograph: Cyril Byrne

I’m not in a great way. I keep burping up fish oil which is making me feel nauseous and a colleague’s use of the expression “selling like hot cakes” set me off on a craving. Why had I never associated that expression with warm, freshly baked Victoria sponge until now? Perhaps because a) I’m on a strict three-day regime in which I am really eating only chicken and broccoli and b) I am mildly hungover after being bridesmaid at the wedding party of the year at the weekend (I know, it’s never ending wedding season for me right now).

Green at the gills

From previous experience I knew that my trainer John Belton was going to go the opposite of easy on my post-wedding indulgence. But it still came as a surprise on wedding day number three, while I was still comfortably lolloping into the beginning of a hangover, when I received an email from Belton entitled “Hardcore”. It was the email every day-three bridesmaid dreads. Listed out in front of me was a shopping list that went something like this: fish oil supplements, CLA capsules, protein powder, chicken, turkey, greens. That was it. There would also be lots of exercise. The purpose of the regime is to set my body to “zero” and kick-start it into fat burning. I’m now one day in and feeling a bit tired, but that might be the 3am dancing rather than the greens.

This morning I was up at 5.30am for a work-out, followed by a protein shake and some broccoli. It can be very grim indeed sitting at your desk at 7am eating cold broccoli from a yellowing Tupperware container.

And then came the shake. I had no idea what protein shakes were until yesterday when I bought a large tub of powder and a shaker. I treated myself to vanilla flavour. That was my first mistake. My endless optimism (read: naivety) lead me to believe that protein shakes might taste quite nice. Fitness instagrammers always seem to be happily slurping on them. (What’s that old proverb? ‘It is an equal failing to trust everybody, and to trust a fitness blogger?’) I was imagining something akin to a thick, sweet Eddie Rocket’s milkshake, but instead I got a mouthful of powdery, gritty, disconcertingly sweet water. Is it possible for water to be dry? It felt like that.

The protein powder I’m using is plant-based and alkaline forming, it helps repair tissue and burn fat. So I’m keeping that in mind when I hold my nose and down it. The CLA and fish oil capsules are also really good for fat burning (are you starting to see the aim of the game this week?). The rest of my diet includes lean meats like chicken and turkey alongside lots of steamed green vegetables and salads. I’m not hungry, and it’s not torturous, but I’m certainly looking forward to the three days ending.

I’ve been trying to avoid getting too wrapped up in the fitness world online, and instead I’ve been following #BodyPositive bloggers with interest.

Body Positive bloggers promote a healthy attitude towards normal bodies, often by sharing photos of themselves. One trend among some of these bloggers is to wear tight clothes to purposefully show off the roundness of their stomachs, think of it like an anti-spanx movement.

Using the hashtag #EmbraceTheSquish, these women are rallying against the accepted aspirational “normal” body type for young women. I think it’s wonderful, and I spent an hour scrolling through images of smiling, gorgeous, normal looking women on instagram. Then the next day, I was handed a Women’s Health magazine which promised “12 weeks to rock-hard abs”. The comparison really struck me, but not in the way you might think.

It’s easy to consider the first message as a positive one that encourages self acceptance and the second as a negative message that creates unrealistic and unhealthy expectations. We are used to being told we need abs, and certainly not used to being told to celebrate our round stomachs. We are quick to criticise sections of the media in promoting what we deem as unhealthy ideals. But what irritates me, retrospectively, is that both messages focus entirely on one thing: how a woman looks. Wouldn’t it be nice if we could all focus a little more on how we feel? If women, and indeed men, could simply inhabit their bodies rather than be judged by their appearance, and we could all spend a lot more time thinking about far more interesting things. Instead of focussing on the end results, we could be focussing on the route to them.

Apart from the mild hangover and the fish-oil burps, since starting this journey I feel better than I have in a long time. And instead of thinking about how flat my stomach is, I am thinking about how I am going to do a full chin-up next week. Bodies are our society’s preoccupation, and it’s not news that some women will go to dangerous lengths to achieve the bodies they see in the media. This is something that I am acutely aware of when writing this column. Yes a part of me wants 12-week abs, or probably more realistically 12-month abs, and a part of me wants to celebrate having soft stomach. But more than that, I’d like not to have to think about either. I don’t want to be #Fitspo but I’m not sure I really believe in being #BodyPosi either. There should be a hashtag for #FeelingABitSmugAfter GettingUpAt5amAndManagingA60SecPlank. That’s a movement I could get behind.