‘A moment of clarity’ on trying to quit smoking by accident 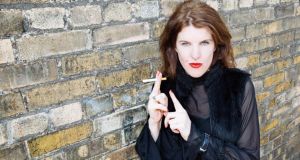 Barbara McCarthy: ‘My fidgety hands were bereft. I’m not a fan of vaping, so there were no replacements. Even chocolate won’t cut it.’ Photograph: Angela Halpin

I gave up cigarettes by accident. It coincided – give or take a few weeks – with the start of Lent so one could say, I gave them up for Lent.

I’m not even Catholic.

I dared myself not to smoke, and now I have to follow through, according to me.

Obviously it’s a really good decision, so I won’t go into the virtues of why smoking is bad – we know all that already. I’ve barely put out my last cigarette, so I’m not in a position to dish out advice like a smug puritan. I’d rather just share my short non-smoking journey to date.

Like many pregnancies, it was unplanned. I was on a skiing trip in Austria smoking, drinking and doing all my favourite things, when it was suggested to me by a heart surgeon that I stop. At my age, you build up a resistance to unsolicited advice, so I brushed it off and insisted that I would never stop.

Be careful who you tell – some people will be happy, some resentful, some meddling. It’s easier to keep numbers down

The next day, I had what alcoholics and Jules Winnfield (Samuel L Jackson) in Pulp Fiction call “a moment of clarity”.

I thought, am I that weak? Could I possibly, if I dared myself, stop smoking – just like that? Whatever about the health implications, it is the dare that propelled me do it.

I started smoking in the toilets in school in 1989 when Charlie Haughey was taoiseach, the Berlin Wall was intact and Girl I’m Gonna Miss You from Milli Vanilli was in the charts. Not once, since then have I gone: “They’re bad for me. No sh*t. Must stop immediately.” My attitude was to be fully committed. If I’m going to smoke, I’m not going to beat myself up about it. And I never did.

I used to dream of climbing 8,000-metre mountains without oxygen. It didn’t happen, so I thought I’ll just quit fags instead.

But just stopping from one minute to the next was like saying goodbye to an old friend. The nostalgia was overwhelming. I only stuck to one brand – Marlboro Red religiously, so preposterously, I even felt guilty that I was turning my back on Philip Morris.

I previously had a good run of giving up when I was pregnant and had to sit through the World Cup final with no fags or alcohol.

I’m half-German. It was awful.

After breastfeeding for 10 months, I chose to just social smoke. It’s perfectly legitimate, I surmised. I’ll smoke when I drink. I don’t drink that much, so it’s fine. Zero guilt. Also I’m good at swimming and walk loads.

Some people will argue, that social smoking is as dangerous as smoking full time, and an addict is an addict. They were right. When I came home from skiing, the first few hungover days were fine, but once I felt normal again, cigarettes became my obsession. I couldn’t think of anything else.

I still had duty frees at home for Christ’s sake. The first night out, I got a friend to light one of my cigarettes and took three drags. They were glorious.

During the next four that followed, I thought I was losing my mind. Going cold turkey is a bare knuckle ride through withdrawals hell. I couldn’t socialise. Life was boring. My fidgety hands were bereft. I’m not a fan of vaping, so there were no replacements.

Even chocolate won’t cut it.

Luckily, I was in the South African wilderness with my daughter and no one smoked my brand, so I wasn’t tempted.

Even when I was in the height of smoking, I could be on an island surrounded by another brand and not smoke them. This meant much scabbing from me, zero scabbing back. Clearly karma doesn’t work for cigarettes.

When I came home, I went out on Paddy’s Day and managed to go drinking without smoking. Something I probably couldn’t have done four weeks before.

I was proud, but also shocked that I still had a dirty hangover. Beyond that, I haven’t had a metamorphosis, becoming an ultra marathon runner or anything. My life hasn’t changed, I’m just not lighting up anymore and strangely I have a cough.

It’s still way too early to say if I give up cigarettes for good. I’m realistic about it. If I stop for 10 weeks and smoke again, I can stop again. I’m still in the post break up phase, so I’d have to come back after a year and assess my progress, once the romantic attachment is gone.

For anyone thinking of quitting, I’m not going to offer advice. Everyone has their own journey.

But be careful who you tell – some people will be happy, some resentful, some meddling. It’s easier to keep numbers down.

Stopping social smoking takes life’s little highlights away – no celebratory fag with your drink, but I guess, my four-year-old daughter not seeing me smoke is probably a far greater reward than any. That and smokers mouth lines. And a litany of horrible illnesses.