Eat your veg: fruits, fish and vegetables linked to a longer life

Research finds one-fifth of deaths are associated with poor diets 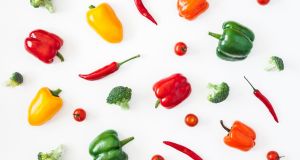 Mom is right when she says to eat your peas.

In one of the largest surveys of data on global dietary habits and longevity, researchers found that consuming vegetables, fruits, fish and whole grains was strongly associated with a longer life – and that people who skimped on such healthy foods were more likely to die before their time.

The study, published in the British journal The Lancet, concluded that one-fifth of deaths around the world were associated with poor diets – defined as those short on fresh vegetables, seeds and nuts but heavy in sugar, salt and trans fats.

In 2017, that came to 11 million deaths that could have been avoided, the researchers said. Most of those, around 10 million, were from cardiovascular disease, researchers found. The next biggest diet-related killers were cancer, with 913,000 deaths, and Type 2 diabetes, which claimed 339,000 lives.

“These numbers are really striking,” said Dr. Francesco Branca, the top nutritionist at the World Health Organisation, who was not involved in the study. “This should be a wake-up call for the world.”

The study, which was funded by the Bill & Melinda Gates Foundation, covered global eating habits from 1990 to 2017 and tracked consumption in 15 categories – including milk, processed meat, seafood, sodium and fibre.

Researchers analysed data from 195 countries and found that Papua New Guinea, Afghanistan and the Marshall Islands had among the highest proportion of diet-related deaths, while France, Spain and Peru had some of the lowest rates. The United States ranked 43rd. China was among the worst at 140.

The study found a tenfold difference between countries with the highest and lowest rates of diet-related deaths. For example, Uzbekistan had 892 deaths per 100,000 people compared with 89 in Israel.

Beyond its sobering conclusion, the study was notable for what it prescribed: Rather than browbeating people to reduce their consumption of the fats and sugars that are correlated with illness and premature death, the authors determined that adding healthier foods to global diets was a more effective way to reduce mortality.

That’s because the gap between the amount of nourishing foods people should eat but don’t is much greater than that between the levels of harmful things they regularly put in their mouths but shouldn’t, said Dr Ashkan Afshin, an epidemiologist at the University of Washington who was the paper’s lead author. For example, he noted that global average intake of red meat was 27 grams a day, slightly higher than the recommended daily limit of 23 grams. But when it comes to eating healthful nuts and seeds, most people eat on average 3 grams, far less than the 21 grams considered optimal.

The only exception was excess salt, which the research said was highly correlated with illness and death. “To me, this study says that it’s time to change the conversation both at the policy level and among the general public,” Afshin said.

He and other experts said the findings underlined the importance of national policies to boost the availability of fruits and vegetables, especially in low-income countries where fresh produce can be costlier than processed food. Large food companies should be pressured to create healthier products, the experts said, and doctors should be encouraged to discuss the importance of a good diet with their patients.

“Let’s not just focus on the things we should be cutting out of our diet because to be honest, we’ve tried that for a while,” said Dr Nita Gandhi Forouhi, an epidemiologist at University of Cambridge School of Clinical Medicine who wrote a commentary that accompanied study.

Not everyone agreed with the study’s central recommendations. Dr Arun Gupta, a paediatrician and nutrition activist in India, said he thought the authors should have placed more emphasis on the role that food companies play in the spread of unhealthy foods. “My fear is that this will take the pressure off industry, who can use the report to say, ‘we’re doing nothing wrong’,” he said.

The study had some limitations. There were notable gaps in diet-related data from poorer nations and some of the deaths, the authors noted, could have been attributed to more than one dietary factor, leading to an overestimation of the burden of diseases attributable to diet.

Still, nutrition and health experts who read the report said its key findings were irrefutable. “This further builds the evidence base around the fact that diet is killing us,” said Corinna Hawkes, director of the Centre for Food Policy at City, University of London.

Forouhi, the Cambridge epidemiologist, said she hoped that at the very least, the national ranking of diet-related mortality would jolt some countries into action, especially those without national dietary surveys. “Perhaps by naming and shaming, some of the countries at the bottom of the list will be inspired to do better,” she said. “At the very least, they can learn from countries near the top.” – New York Times