Just knowing the game is rigged can help you feel better straight away, say authors of new book 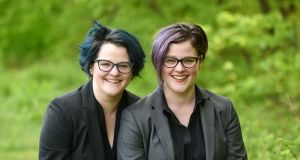 Emily and Amelia Nagoski, authors of Burnout: The Secret to Solving the Stress Cycle

Conductor Amelia Nagoski didn’t realise how much stress was affecting her health until she ended up in hospital. And it was while she was in hospital that her twin sister, Emily Nagoski, a health and sexuality educator with a PhD in health behaviour, showed her some of the scientific research into the effects of stress on the body – and particularly on women’s bodies.

“I had my eyes opened,” says Amelia. “Not only to the physiology of stress and how it was impacting my body, but that one of the sources of stress that I was experiencing was the sexist doctoral programme I was in. I had never been immersed in such blatant sexism before, and I had never really believed that . . . I could label it that simply.”

If she had been able to identify that misogyny and had been aware of the effects of constant stress on her body, maybe she would have been able to do something about it. And so she and Emily decided to write a book that could help other women avoid the same trap.

The result is Burnout: The Secret to Solving the Stress Cycle (Vermillion), a rigorously researched exploration of stress and what we can do to manage its causes and effects. The Nagoskis point out that the human body copes with a stressor by essentially preparing to run away from it. This was practical when our stressors were, say, being chased by a lion – all we had to do was run to a safe place, then our bodies would relax. We would have completed the “stress cycle”. But things aren’t as straightforward today. And if we don’t complete this cycle, our bodies are left to cope with the adrenaline, cortisol and glycogen that have flooded our system.

Emily says that this was something she had always felt instinctively. “I knew, from when I was 14 years old, that I had to grant my body permission to move through these emotions.”

But Amelia had never felt this way. “Once I knew, I knew exactly what I’d been doing wrong, and I could feel what the emotions in my body wanted to do.” She says she found it easy, but she had to use her imagination – just running on the treadmill didn’t work.

“So I would imagine myself on the elliptical machine as Godzilla,” she laughs. “Stomping down the administration buildings with lots with people running screaming from my power and strength. I’d get to the end of that run and I could feel the relief and the feeling and the power in my body, not just sweating and tired from having burned calories, but from having really gone through a different level of completion. It didn’t take much at all to make it really much more effective.”

Of course, men need to work through the stress cycle too, and they also need to prioritise rest. But Burnout focuses on women because, as they point out, women face specific stressors. And what makes the book so striking – and important – is that unlike the majority of self-help books, it examines the structural causes of these stressors.

“It was one of our strongest motivators in writing the book,” says Emily. “Women in particular are in this double bind about their own wellness. On the one hand they don’t have access to the structural power that would grant them opportunities to create resources and support to promote their own wellbeing, and [on the other] they’re being gaslit and told no, you’re not being denied access to this structural power.”

In Burnout, the sisters remind us that while we can’t tear down the racist, classist patriarchy straight away, science proves that acknowledging that some of our issues are caused by structural problems beyond our control can help us cope with them. Or as they put it in the book, “just knowing the game is rigged can help you feel better straight away”.

They write powerfully about what they call “human giver syndrome”, in which some people are conditioned to serve others while others are allowed to fulfil their own needs. The vast majority of primary care givers are women, making it even harder for them to acknowledge their own needs. Add what they call the “Bikini Industrial Complex”, the businesses that profit directly from women hating their own bodies, and it’s no wonder so many women find it hard to look after themselves.

But there is hope. As the initially radical concept of self-care becomes commodified and used to sell green smoothies, the Nagoski sisters believe that the best way women can battle stress is to reach out to others and create accessible support networks. “To some extent all of us want to be empowered, but really it’s not individual empowerment alone that will get all of us to the place that we want to be at as people in our families and in our culture,” says Emily. “It’s collaborative empowerment. It’s sisterhood that’s ultimately going to save us.”