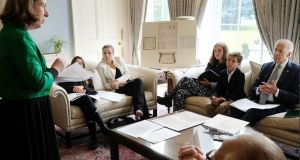 Fiona Fitzsimons presenting her research to the Bidens during their 2016 visit to Ireland. Photograph : White House Press Office

It is “not surprising” that descendants of Irish emigrants who left during the Famine are now becoming “part of the establishment” in the United States, a genealogist who researched the Irish connections of Joe Biden and Barack Obama has said.

Fiona Fitzsimons, researcher with the Irish Family History Centre, said descendants of former US presidents John F. Kennedy, Ronald Reagan, Mr Obama and president-elect Mr Biden all left Ireland for America “within about 10 years of each other”.

“It’s the 500lb gorilla in the room that you can’t ignore; the Famine. In six years the Irish population was depleted by about a quarter,” Ms Fitzsimons said.

“Every fourth person either died or emigrated in a six-year period . . . there’s a flood of Irish into America. So it’s not surprising that from the 1960s through to the present that you’re seeing the descendants of that generation of Irish, who have now become part of the establishment.

“These were poor Irish flooding in that weren’t the well-connected, well-educated middle classes with resources who came and settled. It took them a number of generations to establish a foothold and to get an education and work towards becoming the establishment.”

Ms Fitzsimons, along with her colleague Helen Moss, were commissioned to research Mr Biden’s Irish connections ahead of his visit to Ireland in 2016 while he was serving as vice-president.

Two of Biden’s great great grandfathers were originally from Ireland – Patrick Blewitt from Ballina in Co Mayo and Owen Finnegan from the Cooley Peninsula in Co Louth.

The Blewitts and the Finngeans eventually ended up settling in Scranton, Pennsylvania, having left Ireland in the late 1840s.

Ms Fitzsimons said although Biden was raised with “a keen sense of being Irish”, Mr Kennedy’s links to Ireland were stronger. A number of the late president’s great grandparents were from Ireland.

“I think at this stage there’s something like 22 Irish-American presidents,” Ms Fitzsimons said.

“We don’t think about most of them because they are Ulster-Scots. The narrow way that we defined what it was to be Irish in the 20th century – rural and Catholic – that tends to exclude our heritage which is kind of ridiculous when you consider how important that connection with the United States has been to us.

“I don’t think he’s [Biden’s] the most Irish. JFK, before he ever went across [to Ireland], he didn’t need a genealogist because he was in touch with the family. They remained in touch with the family. Whereas for President Obama, they were surprised that there was an Irish connection there – it was so long ago to them they had forgotten about it.”

Ms Fitzsimons added she believes the “scramble to find a politician’s roots”, such as American presidents’, is “a way to try and claim common ground with them”.

The Irish Family History Centre publishes a free magazine every quarter which is available at https://irishlivesremembered.ie/