‘Distressed’ resident in direct provision centre forced to sleep outside 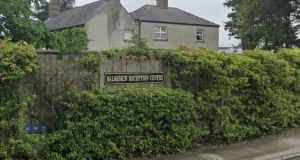 A direct provision centre put a resident out of his accommodation rather than phone for an ambulance when the man sought mental health support, the Dáil has been told.

Sinn Féin TD Louise O’Reilly said the incident “made my blood run cold” when she heard that the resident in a distressed state was left outside the centre in north County Dublin and forced to sleep outside overnight before an ambulance was called.

Ms O’Reilly and her Dublin Fingal Labour constituency colleague Duncan Smith highlighted the incident at the Balseskin reception centre during a debate on the final report of the Oireachtas Covid-19 committee.

Mr Smith said it was “highly distressing” that an institution being funded by the State “wouldn’t even make a phone call for an ambulance”.

Ms O’Reilly said the man was put out of the his accommodation on Wednesday night and on Thursday one of the members of Fingal Communities against Racism called an ambulance at 2.30pm on Thursday but it did not get there until 6pm.

Mr Smith said the case was brought to his attention on Thursday afternoon and he phoned the reception centre.

He told them he was a TD for the area and asked what he could do to help.

“I was told ‘whatever happens outside the gate is nothing to do with me. Ring IPAS’ (International Accommodation Protection Service) and the phone call ended almost immediately.”

Mr Smith said he rang IPAS and got a voicemail that did not take messages and it was highly distressing that a State-funded institution would not call an ambulance.

The Sinn Féin TD expressed concern that everyone on the Covid-19 committee agreed that the situation with direct provision was not good enough and that changes had to be made.

“For a very brief period I think people actually thought about the lived experience and the reality of what it is like for people in direct provision,” Ms O’Reilly said.

“I hope we can learn the lessons that are contained within the report but I fear we won’t.”

Speaking about the role of the committee Mr Smith said he regretted the committee had finished its work. He agreed at the time that it should end but acknowledged that he might have been naïve in thinking the established committees could deal with it.

But he said those committees were finding it difficult to deal consistently with the many different issues involved with the virus.

But he said “you can’t put the toothpaste back in the jar”.