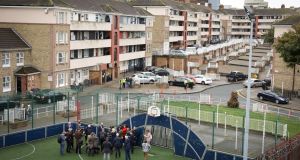 A regeneration programme for Oliver Bond House, one of the largest and oldest flat complexes in Dublin city will take up to 15 years to complete, according to Dublin City Council architects.

The 14 blocks of 391 flats between the river Liffey and the Liberties in the southwest inner city, built in 1936, have been beset with social and structural problems for decades, with residents enduring persistent rat infestations.

Attention focused on the complex last September when a large-scale outdoor rave was held in the complex, in contravention of coronavirus restrictions and to the distress of many residents. Taoiseach Micheál Martin subsequently visited the complex and said the Government was committed to supporting its regeneration.

Preliminary redevelopment proposals have now been produced by the council’s architects division. Short-term work will focus on improving the outdoor areas by blocking the circulation of cars through the estate and creating new green areas, playgrounds and clothes-drying areas. Under the plan, cars would no longer be permitted to park in courtyards or on the internal streets in the estate, but would be restricted to a number of dedicated parking areas away from the green areas and playgrounds.

New bin-storage facilities and a recycling programme will be introduced to combat fly tipping to help eliminate the food source for rats. Work on these measures will commence shortly.

However, the regeneration of the buildings would be a considerably longer project. Oliver Bond House was designed by renowned city architect Herbert Simms and is a protected structure. Instead of demolishing and rebuilding the estate, the council will retain the buildings, but upgrade them to modern standards. This will involve replacing the windows, insulating the walls, installing heat pumps and replacing the internal facilities such as bathrooms and kitchens.

This would be done through an “amalgamation programme”, council architect Martin Donlon said. The existing flats, which do not meet size standards, would be combined to make a smaller number of larger homes. The number of flats in the estate would be reduced by about a third, but the number of bed spaces would not see the same reduction as there would not be a duplication of kitchen or bathroom facilities in the amalgamated flats.

The size of the estate and the need to retain the external building fabric meant the project would be extremely lengthy, Mr Donlon said. “An amalgamation programme of this nature could take up to 15 years, or longer, to deal with decanting, the works, de-tenanting and re-tenanting, so it’s an incredibly long programme.”

However, he said, the only way to achieve modern living standards while retaining “buildings of historic interest” was to undertake the amalgamation project.

“The only way we can address all of the issues with the building – address the fabric, the windows, the walls , the thermal upgrade, improving the heating – the only way is through an amalgamation programme.”