Bloody Sunday centenary: ‘For my grandfather...it ended in tragedy’

Actor Brendan Gleeson read an emotional narrative , while Taoiseach Micheal Martin and President Higgins were among those to lay wreaths at Croke Park for a special GAA event to commemorate the 14 lives lost on 21 November 1920. Video: RTE News Now 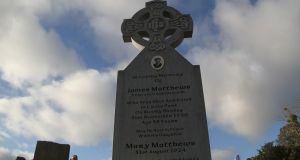 The grave of James Matthews at Glasnevin Cemetery in Dublin.

Until 2016, James Matthews was one of the victims of the Croke Park massacre on Bloody Sunday whose resting place was an unmarked grave in Dublin’s Glasnevin cemetery.

The 38-year-old, from a tenement on North Cumberland Street, was married with four daughters.

Like many shot on that day, his family did not have the means to erect a headstone, and Matthews lay unmarked and, for the most part, unremembered for the best part of a century. That was until the GAA’s Bloody Sunday project erected a headstone over his grave in 2016.

Nancy, his then 95-year-old daughter, attended the unveiling and paid a silent tribute to the father she never knew. Her mother was three months pregnant with her on Bloody Sunday. Nancy died in 2018 and is buried in Glasnevin cemetery near her father.

On the 100th anniversary of his death, members of his extended family visited his grave. His grandsons - John, Martin and James Lynch - laid a wreath in the Dublin colours and placed a Dublin GAA flag beside it.

The visit coincided with an announcement by the Abbey Theatre that a bursary has been created in the name of James Matthews to allow an artist to reimagine his life and death.

Matthews died while trying to flee Croke Park during the shooting. He was shot as he attempted to scale a wall out of the ground and died later from shock haemorrhage.

“In normal circumstances we would have been in Croke Park,” said James Lynch, who is named after his grandfather. “It is great that we have an actual grave to visit.

“For my grandfather it was a normal Sunday and it ended in tragedy. The impact on our family was horrendous.”

Twenty years after Matthews died, his widow Connie fell off from a balcony in Mary’s Mansions in Dublin.

“That piled on more tragedy for my mother,” said James Lynch. “When her father died, she was just three. When her mother died she was into her 20s. There was very little said about it.

“My mother did tell me when I was old enough to know that my granny had taken her own life and she probably never got over Bloody Sunday.”

James Burke (44), another of the 14 victims shot dead by Crown forces on Bloody Sunday, was remembered at a dawn ceremony in Ballinteer St Johns GAA club in south Dublin. The father-of-five lived close to where the club’s grounds are now.

The tricolour and the flags of Dublin and Tipperary were raised at dawn and lowered at 3pm by his grandsons and great-grandsons. The granite base of his headstone will be moved to the club grounds into perpetuity.

The GAA staged a special remembrance ceremony on Saturday to honour the 14 victims killed at Croke Park by crown forces on Bloody Sunday - November 21st, 1920.

Fourteen flames were lit on Hill 16, with a corresponding pillar of light dedicated to each of those who died. Taoiseach Micheál Martin and President Michael D. Higgins attended the event.

In a statement, the President said: “At the close of that day of such killing and injury 100 years ago, 32 people, three of them children, lay dead or dying in Dublin. Countless others were wounded, many with their lives irrevocably changed as a result of the events of the day. More death and heartbreak was to follow.”

In a statement to mark Bloody Sunday, the British ambassador Paul Johnston said it was a “day for reflection” and he echoed the words of Queen Elizabeth II when she visited Ireland in 2011.

“To all those who have suffered as a consequence of our troubled past, I extend my sincere thoughts and deep sympathy. With the benefit of historical hindsight we can all see things which we would wish had been done differently or not at all.”