Good news: choose well and you can have your cheesy, meaty pasta and eat it 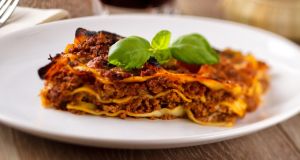 Lasagne could be considered a staple Irish food. Photograph: iStock

Lasagne is so popular here it could be considered a staple Irish food. There’s little as inviting as the smell wafting from the oven as the cheese melts. It’s no quick job to put it together, however, even if using ready-made pasta and sauces. This probably explains why there are so many varieties in the chilled foods aisles of supermarkets. Lots of them are not loaded with additives and preservatives. So you can have your cheesy, meaty pasta and eat it too.

The most enticing-looking is probably Birds Eye’s Beef Lasagne. The picture is enough to make you salivate, which is not surprising given that the brand is owned by Nomad Foods, which is among the largest frozen food companies in Europe. So there is plenty of marketing money to spend on photography. It also says it is “Made in Italy with UK and Irish beef and tomatoes”. That seems a bit of a faff taking beef from here to Italy and back again, but that is how food giants operate. The code on the back – IT T5F7C CE – indicates the product comes from the Industria Alimentare Ferraro factory in northern Italy.

It’s sounds good, too, with plenty of tomatoes, meat, sauce and pasta, but no strange additives, just some sugar. There is almost 16g of sugar in a serving, but some of that will be the natural sugar from tomatoes. It has one of the highest calorie counts at 160kcal per 100g. That adds up to 649kcal in the 400g single-serving box or about one-third of a person’s daily needs.

That shouldn’t put you off, however. Sometimes a lower-calorie product comes at a cost in terms of quality.

Lidl’s Chef Select Beef Lasagne manages to serve up just 128kcal per 100g, or 512kcal in a 400g single serving. Where they make the saving is hard to work out. At first glance it looks like there is a lot more meat.

So is almost one-third of the dish beef? No. What that really means is that half of the dish is Bolognese sauce and beef is 32 per cent of that. So the dish is about 15 per cent meat, which is about the same as most brands. It does use skimmed milk powder and vegetable oil rather than full-fat dairy versions. The label says it was made at Mamma Lucia in Belgium using British beef, and the BE code backs that up.

Another lasagne from Belgium is that sold under the Carrolls of Tullamore brand. This looks unenticing and it uses pork, rather than beef, modified maize starch and flavourings. It’s a smaller product at 350g and the nutritional information shows it has 143kcal per 100g. If you want to know how many calories that adds up to, you have to do the sums yourself, which by my reckoning is about 500kcal in a packet. That’s about the same number of calories as seen in the bigger 400g packets from other brands.

Aldi sells an inexpensive 1kg Meal to Share lasagne. A one-third portion of about 330g would add up to 460kcal. So, again, there is no need to choose one over the other based on calorie count.

This product scores well in the level of beef at 20 per cent. It has added sugar three times, however, as caramelised sugar syrup, dextrose and maltodextrin. It was made in Austria using British beef.

There are Irish lasagnes available, though they tend to be more expensive. Supervalu’s Prepared for You Beef Lasagne weighs 1.2kg and costs €6.50. So it’s a little bigger than Aldi’s product but about twice the price. It also has 20 per cent beef, but the list of ingredients is more appealing as it uses cheese, butter, wheat, beef stock and herbs and spices. Aldi’s list includes ingredients such as xanthan gum, modified maize starch, milk proteins and dried skimmed milk.

It’s always worth reading the label as dishes can vary even within a brand. So, for example, Tesco’s beef lasagna has plenty of beef at 23 per cent and nothing unusual in its list of ingredients. Tesco’s Finest beef lasagna has almost the same ingredients, but with added wine, nitrites and nitrates in the pancetta and egg lysozyme. Lysozymes are enzymes with antimicrobial properties used in the making of the Grana Padano cheese. They may not sound enticing but they are a key part of the cheesiness.

Paddy Holohan: ‘MMA was a liferaft to grab onto’
9