Spread the word: the rise of craft butter

Once overlooked, butter is now centre of the plate, with restaurateurs sourcing artisan varieties from far-flung dairies. But it is surprisingly easy to make yourself 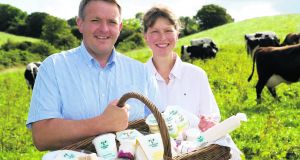 Alan and Valerie Kingston of Glenilen Farm in Co Cork.

I have been at least 20 per cent happier since I discovered that the Danes have a word, tandsmør, for toothmarks in a good, thick layer of butter. I learned this from Bread & Butter, a book that shines a much-needed spotlight on two foods too often taken for granted in this country.

But times they are a changing: “artisan” or “craft” butter has been widely tipped as an important food trend this year, with one major forecaster going so far as to describe butter as “the new bacon”. In truth, as Peter Foynes, the curator of the Cork Butter Museum – who can barely keep from rolling his eyes at the word “artisan” – explains, all butter is made the same way, whether it’s muddled in a wooden churn by a toothless crone or whizzed up in a shiny modern factory.

The difference, as Foynes puts it, “is all in the milk” – the breed of cow that produced it, its diet, the time of year and a thousand other factors that affect the finished product.

Irish butter, for example, gets its startlingly yellow colour from the high levels of beta carotene in the grass which, in turn, is down to the local climate. At Glenilen Farm, near Drimoleague, Co Cork, they avoid producing butter during the winter months when their cows are indoors because they don’t think the quality is as high, freezing summer surplus to plug the gap instead.

That milk may be pasteurised or not, depending on the preference of the producer. Cultured butter, which is particularly trendy at the moment (Jay Rayner described it as one of the tastes of 2018), tends to be made with heat-treated milk, although Fen Farm Dairy in Suffolk produces the UK’s only raw-milk version, and very nice it is too.

Either way, the cream is skimmed from the milk and mixed with a starter culture of the kind used to create yoghurt, then left to ferment slightly, giving cultured butters a tangy complexity quite distinct from the gentler flavour of “sweet” butter (which doesn’t mean that it’s sugary, just that it is made with fresh cream). Bloxs Butter, in the New Forest, tells me that, though all of its butters contain the same three ingredients – cream, cultures and salt – the varying mixtures of Lactobacillusin the cultures, and the different milks, mean that each one tastes “uniquely different”.

Glenilen Farm is just one of a number of Irish artisan butter producers. Probably the best known is Abernethy, made in Dromara, Co Down, where it is hand-churned by Allison and Will Abernethy. Breda Butler took over the running of Cuinneog Irish Farmhouse Country Butter in Co Mayo from her mother Sheila and late father Tom. Glenstal Irish Creamery Butter, made in Murroe, Co Limerick by Arrabawn Co-Op, won the supreme championship award at the Blas na hÉireann food awards in Dingle, Co Kerry in 2017.

In the UK, chef Henry Harris, who proudly boasts he uses “a lot of butter” in his French food, is of the opinion that such “farmyardy notes” don’t work well in cooking (“try making a beurre blanc with it and it’s like diving into cowshit”), preferring the “comforting softness” that sweet butter brings to a dish. Increasingly, however, you will find cultured butters on the table in restaurants, if not the kitchen – Harris names Le Beurre Bordier, recently described by Saveur magazine as “the best butter in the world”, as one of his own favourites to eat – as chefs finally recognise the importance of providing decent bread and butter at the start of the meal. In Bread & Butter, the authors observe it is only relatively recently that you will see bread and butter mentioned in critic’s reviews; rightly so, given this is the first thing a diner eats, “and first impressions count”.

At Lyle’s, in east London, they take bread and butter so seriously they make both in house; chef James Lowe explains they buy Jersey and Guernsey cream from Ivy House and Hurdlebrook farms to make their butter, and ferment, churn and salt it themselves, before leaving the finished product to rest for a few days. “The complex flavours that build can’t be matched by anything that you would artificially add to the butter,” he says. “With something as ubiquitous as butter, it’s incredibly satisfying that guests always comment on how good ours is.”

Some chefs can’t resist adding that little bit extra; there’s chicken butter at Adam Handling’s Frog, Bellota ham butter at Asador 44 in Cardiff and a beef butter at The French in Manchester that one correspondent describes as “divine”.

Seaweed butter, as produced by Abernethy, is also popular with Restaurant James Sommerin in Glamorgan, which makes its own from local seaweed, as does The Three Chimneys on Skye. Marmite, miso, treacle and dates, Ethiopian spices and kimchi – you name it, someone somewhere is putting it into butter.

And, pleasingly, you don’t have to be a superstar chef to have a go yourself. Butter-making is surprisingly simple, and as Alan Kingston of Glenilen Farm, a man who has made more butter than even I could eat in a lifetime, says as we stand over the whirling churn, the transformation from cream to butter “still fascinates me every single time”.

To make a roughly 200g block, you will need 400ml double cream. Sweet butter can be made immediately, but if you would like to culture it, stir in 2 tbsp natural live yoghurt or creme fraiche, cover and leave to sit for 12 to 48 hours until it smells slightly tangy. Either way, pour the cream into a stand mixer and beat at medium-high speed, scraping down the bowl regularly until the cream separates into grains of solid butter and liquid buttermilk – don’t overmix it, Kingston cautions, or the buttermilk will start to be reabsorbed. (Note you can also do this in a large jam jar if you have sufficient strength, patience or small children willing to take a turn shaking it.)

Once drained, the buttermilk can be used to make bread, put in a smoothie or just fed to the dog (at Glenilen they give it to their pigs). Rinse the remaining solids in cold water until the water runs clear and then knead in the salt (2 per cent of the starting weight is usual for salted butter, so about 8g here) or any other flavourings you might fancy, from Bovril to rose petals.

Eat immediately, straight from the dish as you wait by the toaster, or leave to mature in a cool place, as you prefer. Traditional, yet trendy, it’s the taste of some of the world’s coolest restaurants, in your very own kitchen. Trust me, you’ll never put a better bit of butter on your knife. – Guardian

My cancer scare, the marathon and me
7