Crowd-pleasing Korean, Chinese and Japanese small plates will tempt you back 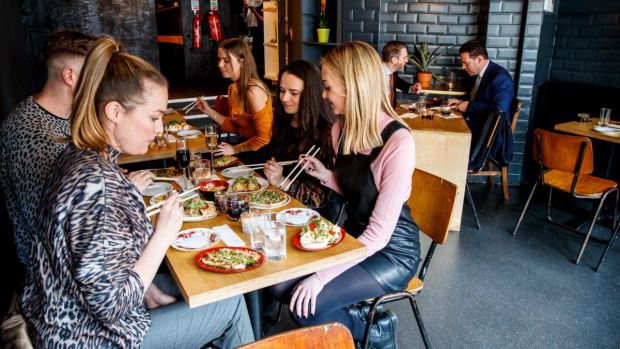 We are going through a peanut rayu craze at the moment. There is a jar of Katie Sanderson’s rubbly sesame peanut and red pepper magic potion perpetually on the counter. A supersize jar. It gets spooned on to (buttered) rye crackers, stirred into leftovers and regularly eaten by the teaspoonful.

A similar sweet, nutty hot and sour blend of Japanese, Korean and Chinese influences is on the chalkboard at Lucky Tortoise. Since January, the lovely waitress tells us, this young operation has had a permanent home on Aungier Street in Dublin.

We tried to go to a pop-up, its previous incarnation, but there was an unfixable problem with a fridge, a case of the unlucky tortoise. On a Monday evening it’s so dimly lit from the outside I fear a repeat, even though I’ve booked online. But no, this tortoise is open for business.

This asset would be sweated much more profitably as a  Deliveroo hub. But, luckily for us weirdos, they’re not doing that

It’s a small place, and booking (even on a Monday night) seems to be essential. As my friend remarks later, the economics of just over 20 covers looks challenging. This asset would be sweated much more profitably as a takeaway or a Deliveroo hub, with a few stools for those of us who don’t want to eat our dinners in front of a box set. But, luckily for us weirdos, they’re not doing that.

The walls are painted boot-polish black. There are black subway tiles. Tables are ply and chairs are primary school circa 1978. There are dim bulbs in glass globes that could do with a polish (they look like they’ve been wiped with a milky cloth) and tea lights in small smudged glasses on the table.

The music is loud and a table of three men arrives, each carrying a single different bottle of beer in an impressive bespoke beer-matching approach that smacks of regular visitors.

Lucky Tortoise just serves wine, which is listed generically as house white and red, with fizzy varieties of both, and an orange wine to be totally up to date. They apologise later about the lack of desserts and tea or coffee. Those are a work in progress.

What they do have is lots and lots of small bowls of tasty-looking food, so much so that my friend is threatening to jump ship and sit at the next table, where there’s a spare seat and their order has already arrived.

What follows is a jumble of mismatched bowls and saucers arriving in no discernible order other than readiness, which is as it should be with this kind of cooking. Lemonades are delivered just in a glass, no lemon, no ice – but we’re not here for the drinks.

What I’ll be back for are the sideshows in the main event, a scallion pancake cut into four and crisp as morning toast, topped with green-oniony scallions. It’s the perfect carrier for slippery shards of kimchi, the spiced, funky, even fizzy Korean fermented cabbage that is a better use of this most Irish of vegetables than even the poshest coleslaw.

The okonomiyaki or Japanese pancake is a delicious combination of light smooth fluffy egg and carb and trashy mayonnaise, with some vegetables for crunch.

The kimchi works brilliantly in the Taiwanese bun, a marshmallow-soft steamed bun you fold over its contents, like a palm-shaped blanket, to transfer all the slippery loveliness of kimchi and tofu cubes to your mouth.

Not everything is perfect. The dumplings blur a little, lost in the blizzard of food. None of them is insistently flavoured enough to stand out as a separate personality. I’d prefer more ginger, always more ginger, and better cabbage flavours.

Lucky Tortoise is a creative, independent, cheap and enormously cheerful spot. And it isn’t a burger joint, which is refreshing

The pork-and-lemon-grass bun doesn’t taste of lemon grass, and a lovely fresh green leaf is parsley rather than coriander, which is a muted setting for the dial that could be turned up several notches higher. But I love the slippery pickled cucumber lengths in the mix. The hoisin beef bun is the best, charred marinated ribbons of beef snuggled in with crisp vegetables and that sharply pickled cucumber.

Lucky Tortoise has the feel of a young operation that’s only going to get better. The windows and light fittings could do with a polish, but maybe those things can get overlooked when you grow up from being a pop-up and have a permanent place to maintain. And I’ll take tasty food over gleaming glass any day.

Like nearby Masa, which has become a firm favourite recently, Lucky Tortoise is a creative, independent, cheap and enormously cheerful spot. And it isn’t a burger joint, which is a refreshing and hard-working approach to making money from food in this town.

With a menu offering this kind of value, you’d have to hit the house wine to breach €50 for a tasty meal for two. I like Lucky Tortoise a lot. We’re lucky to have it.

Dinner for two with lemonades came to €35