Now we know: Dunany farm in Co Louth is one of the leading producers of organic grains in the country 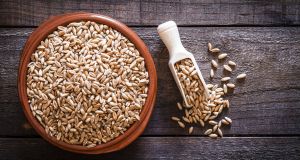 A bowl filled with spelt on a rustic wooden table. A wooden serving scoop is beside the bowl and some seeds spilled out. Photograph: iStock

On the fourth-generation Dunany farm in Co Louth, the Workman family have been producing organic grains since 2006. All of their grains are grown, dried, milled and packaged on the farm, and they’ve become particularly renowned for their organic flours. At the 2019 Food Awards earlier this month, the Irish Food Writers’ Guild shone a spotlight on the excellence of the family’s produce by highlighting their innovative and versatile Irish-grown organic natural spelt berries.

Turns out spelt berries aren’t technically berries – they are kernels of grain. Spelt is an ancient species of wheat that has regained popularity, particularly with organic growers, because of its hardy and robust nature. According to Kari Kaipainen of SunSpelt, a Finnish brand, “the nutritional requirements of spelt are modest, making it easily adaptable to the ecological cycle of nature and especially suitable for organic farming: spelt grows well even in poor soil without fertilisation. . . . when there is no need for fertilisation, there is less burden on the environment.”

Spelt berries look very like wheat kernels and have a gloriously nutty flavour when cooked, not dissimilar to bulgur wheat or farro grains. The Workmans have been growing spelt on Dunany farm since 2010. At The Irish Food Writers’ Guild Food Awards, held over lunch at Glovers Alley overlooking St Stephen’s Green in Dublin’s city centre, head chef Andy McFadden created a Dunany organic spelt risotto. The spelt berries were softened in an umami-rich stock, the dish simply garnished with fresh herbs and herb oil.

What do these ancient grain kernels have to do with you? Well, if you’re starting to question your reliance on imported grains such as rice or are just looking for new flavours and textures to add to your pantry, Irish spelt berries could be easily worked into your weekly menus at home. Just a heads up to the time sensitive among you, most recipes advise soaking the spelt berries overnight before simmering in water for about 45 minutes. You can use spelt berries as a replacement for rice, or serve them up in a salad, soup or stew.

Spelt berries aren’t gluten-free but they’re very high in fibre, B vitamins, essential fatty acids and amino acids. You’ll find Dunany products on sale in specialist food shops such as Ardkeen Grocer in Waterford and selected Sheridan’s Cheesemongers nationwide. To find out how to get your hands on a bag of Dunany organic natural spelt berries, visit www.dunanyflour.com.