Apple slices: Oldies but goodies that are perfect for tea time

Vanessa Greenwood: These deliciously fruity slices are as easy to make as apple pie 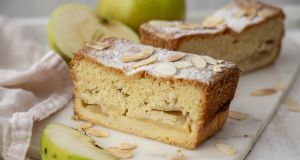 We in Ireland devote an inordinate amount of time worshipping at the altar of the apple pie. Every country has a favourite apple cake. In France, the classic Normandy apple tart faces stiff competition from the apple turnovers (chaussons aux pommes) that are sold in every French bakery. German apple cake (versunkener Apfelkuchen) remains a popular traditional family dessert.

Apple slices often play second fiddle to apple pies and crumbles. Largely out of fashion, an apple slice recipe might occasionally appear on a Leaving Cert home economics syllabus. But they remain popular in bakeries and coffee shops, so while they are oldies, they are also goodies.

This triple layer tray bake is deliciously fruity and moist, with a pastry base, apple centre and fluffy sponge on top. The more I bake these apple slices, the more I love them. For me they offer the luscious delights of Eve’s Pudding (a retro dessert which can be a little messy to serve), with the pleasing aesthetics of pastry.

Apple slices are perfect for tea-time. When served warm, they make a wonderful dessert. They might appear difficult to make, but they are in fact no more difficult than making apple pie. They are best made in a rectangular tin and portioned into even slices (which is probably the reason they are so popular in coffee shops and bakeries).

In this recipe, the addition of ground almonds gives a subtle richness to each slice.

As a variation, you could replace the sponge topping with a crumble topping made from flour, butter, sugar, cinnamon and toasted chopped nuts.

To make the pastry by hand, use a large mixing bowl to rub together the flour, butter and sugar until the mixture resembles breadcrumbs. Use a knife to work in the egg, then bring it together to form a dough. Wrap the pastry in clingfilm and refrigerate for 20 minutes (to make pastry in a food processor, simply blitz the flour, butter and sugar to fine breadcrumbs, then work in the egg to form a dough).

On a lightly floured work surface roll the pastry out into a rectangle slightly larger than the size of the tin. Lay the pastry inside the lined tin, allowing the pastry to rest against the tin walls. Place another sheet of parchment paper over the pastry, fill with baking beans and bake blind for 20 minutes. Once the pastry is slightly golden, set aside to cool.

Peel, core and halve the apples, then cut into 3mm slices (tossing them in the lemon juice stops them discolouring).

Just before baking, arrange the sliced apples over the pastry and sprinkle with the sugar.

To make the sponge, in a mixing bowl, use an electric whisk to beat together the butter and sugar until pale and fluffy. Whisk in the egg. Combine flour and almonds in a bowl, then whisk them into the batter. Whisk in 2 teaspoons of boiling water to loosen the mixture.

Pour the batter over the apple slices and level with the back of a spoon.

Bake in the preheated oven for 25-30 minutes or until the sponge is risen and golden on the top (turn the oven down if the crust is darkening). Remove from the oven and set aside to cool in the tin.

Once the slice is cool, slice it into even rectangles. Dredge icing sugar over the top (and or toasted almonds). Serve at room temperature or warmed, with ice-cream or freshly whipped cream.