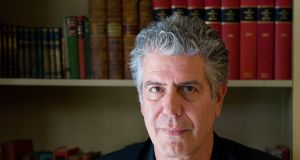 Anthony Bourdain’s final interview has shed light on the chef’s thoughts on travel, culture and politics. The piece, which surfaced on on Sunday, includes Bourdain’s takes on cycles of abuse, the joy that comes from friendship and his own daydreams about the demise of Harvey Weinstein (Bourdain’s partner, Asia Argento, was one of the first to accuse Weinstein of sexual assault).

Here are some of the highlights of that final interview:

“I much prefer people who just showed up in Paris and found their own way without any particular itinerary, who left themselves open to things happening. To mistakes … because that’s the most important part of travel.”

On talking to strangers

“You go to a place like Beirut and you find yourself talking to a Muslim woman. If you’re a journalist tasked with an agenda, you know, you’re there to report a story, and you come right out with it. You’re going right into some very difficult areas. Whereas I have the luxury, I’m there to eat! Presumably. I’m there to eat, and I’m asking very simple questions.

“What makes you happy? What do you like to eat, where do you like to go to get a few drinks; you know? What do you miss about the place when you go away? And I find, again and again, just by spending the time, by asking very simple questions, people have said the most astonishing things to me. Often things that would be very uncomfortable for them outside of that casual context.”

“My happiest moments on the road are always off-camera, generally with my crew, coming back from shooting a scene and finding ourselves in this sort of absurdly beautiful moment, you know, laying on a flatbed on those things that go on the railroad track, with a putt-putt motor, goin’ across like, the rice paddies in Cambodia with headphones on … this is luxury, because I could never have imagined having the freedom or the ability to find myself in such a place, looking at such things.

“To sit alone or with a few friends, half-drunk under a full moon, you just understand how lucky you are; it’s a story you can’t tell. It’s a story you almost by definition, can’t share. I’ve learned in real time to look at those things and realise: I just had a really good moment.”

On cycles of abuse

“You know a lot of the chefs, all of the really bastard chefs, most the really oppressive ones, the old school ones, were abused children, were abused by their parents, were abused and neglected, physically, mentally, in every possible way, and then became just like their abuser, and would perpetuate the system.

“A lot of chefs never really understood, or understood only really belatedly; they’d been powerless for much of their careers. I don’t know. For most of my career, chefs were creatures without power. To talk about power imbalance, is … in retrospect, there was one. But I think we all saw ourselves at outcasts, as weak, except in our little bubble in the kitchen.”

“The contempt and the ridicule which has been heaped on places like West Virginia, which is the heart, demographically, of enemy territory, as far as New York liberals like us are concerned … This is something we f**ked up in the sixties. We were fighting against cops and construction workers … cops and construction workers were exactly who we f**king needed! They were the first to die in Vietnam. We weren’t gonna!”

“Somebody at the White House press briefing has to sacrifice their job and say: You utter piece of shit! Do you really expect us to swallow that steaming load of horseshit? How do you live with yourself? You should be ashamed. Give me one guy to throw themselves on a fire like that, lose access, lose the gig at the White House, for that infinitely repeatable meme. Give me that. Just give me that. Someone to stand up.”

On not being an artist

“From the very beginning I’ve always and only made the television I wanted to make, and as soon as I could I told whoever was involved to go f**k themselves, and somehow landed on my feet someplace else, with somebody who was willing to indulge me in even grander fashion. So I haven’t had to deal with the grim reality of well, you either do the Best Burgers in America show, or you have no work at all! I haven’t had to live with that. I haven’t had to be particularly nice to people I don’t like. Ever.”

“We cannot choose the leaders of our revolutions, they’re all deeply flawed and they will all – all revolutions will be corrupted …

“The minute everybody in the room agrees with you, you’re in a bad place, so I’m a big believer in change just for its own sake, just to show that you can change, to move forward incrementally, but ain’t nobody gonna make everything better. Whoever has the intestinal fortitude or the megalomaniac instincts sufficient to lead any kind of a revolution will inevitably disappoint horribly.

“The best revolutionaries of course are martyrs who died before they could turn into disgusting, self-serving, corrupt pieces of shit. As they all do.”

“Asia [Argento]said this to me: children create themselves independently of us. All you can do is show, like in my case, my daughter feels loved. She knows she’s loved. She has good self-esteem. Very important. And good martial arts skills. So … she knows she can take any boy in her age group. That’s all I can do as a father … I can’t pick her music, her boyfriends, whatever, however she’s going to turn out. I can give her these basic things.”

On the imagined death of Harvey Weinstein

“My theory of how he goes is uh, he’s brushing his teeth in a bathroom, he’s naked in his famous bathrobe, which is flapping open, he’s holding his cell phone in one hand because you never know who on the Weinstein board has betrayed him recently, and he’s brushing his teeth – he suddenly gets a massive f**king stroke – he stumbles backwards into the bathtub, where he finds himself um, with his robe open feet sticking out of the tub, and in his last moments of consciousness as he scrolls through his contacts list trying to figure out who he can call, who will actually answer the phone.

“And he dies that way, knowing that no one will help him and that he is not looking his finest at time of death.”