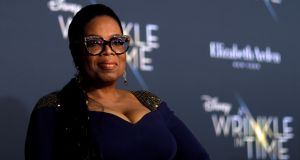 “I love bringing people together over a good meal,” Oprah Winfrey said after investing some of her $400m fortune in a chain of healthy eating restaurants. Photograph: Mario Anzuoni/Reuters

Billionaire Oprah Winfrey is putting her money where her mouth is, investing in a health-driven restaurant chain that tries to put better-for-you options at busy Americans’ fingertips.

Winfrey is taking a stake in True Food Kitchen, with her investment slated to help it expand across the US. The brand plans to double its store count to about 46 in the next three years with a focus on the East Coast, including New York, New Jersey and North Carolina.

“It’s incredibly significant to us as a company to have her,” Christine Barone, chief executive officer of True Food Kitchen, said in an interview. Winfrey also is joining the board of directors and will be helping with company strategy, she said.

Centerbridge Partners, which also owns P.F. Chang’s, will remain the majority shareholder of Phoenix-based True Food Kitchen. The company declined to say how much Winfrey is investing, beyond the amount being significant.

In the past, Winfrey, 64, has used her wide-ranging appeal to boost companies, including helping fuel a comeback for Weight Watchers International Inc. The diet company has been on a tear since the billionaire media mogul bought a stake in and agreed to pitch the brand in 2015. Winfrey’s tweets and pronouncements about losing weight on the program have sent the shares skyrocketing, adding more than $400 million to her net worth and pushing her into the world’s top 500 richest people.

“I love bringing people together over a good meal,” Winfrey said in a statement Wednesday. “When I first dined at True Food Kitchen, I was so impressed with the team’s passion for healthy eating and, of course, the delicious food, that I knew I wanted to be part of the company’s future.”

There are no freezers or fryers in the restaurants, and the menu changes four times a year. True Food Kitchen revenue will be about $170 million this year, while average store sales are more than $7.5 million a year, Barone said.

Still, the industry is a difficult one with many restaurants struggling to find workers amid minimum-wage increases and rising rents. There are 1.5 percent fewer restaurants in the U.S. as of Sept. 30, compared to the year prior, NPD Group data show. Celebrities don’t necessarily guarantee success -- Bobby Flay and Emeril Lagasse have both recently closed restaurants.

True Food, founded in 2008, has 23 restaurants in the US. Menu items have included asparagus toast, cashew pad Thai and grass-fed burgers. Looking to appeal to Americans’ quickly changing palates, the chain has vegan, vegetarian and gluten-free options. It also sells beer, wine and cocktails.

It’s not yet clear how much involvement Winfrey will have in the food itself, Barone said.

“We do look forward to sharing the menu items with her, but I don’t know exactly what role she’ll play,” she said.