Emma Ferguson, who had her 3-week-old son with her at the competition, will see her seeded brown soda go on sale in 133 Aldi stores around Ireland 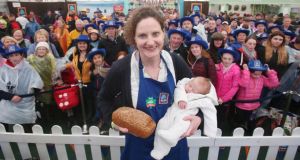 Here's one I made earlier ... Emma Ferguson with three-week-old son Paddy and her winning loaf

Emma Ferguson, a mother of three from Rathmolyon, Co Meath, is the winner of the National Brown Bread Baking Competition. Her loaf will go on sale in 133 Aldi stores across Ireland in December and she is guaranteed a profit share of at least €10,000 from sales.

Ferguson describes her winning bread as “a fairly standard soda bread, with loads of seeds”. She has been refining her recipe since entering the competition last April, after reading about in The Irish Times. “I was still working on it up to two weeks ago – version 18 is written in the notebook.”

The dry ingredients in the winning loaf include brown and white flours, chia, flax and poppy seeds, wheatgerm, porridge oats and pinhead oatmeal. “Because the seeds can make it heavy, I add baking powder as well as bread soda,” Ferguson says. It is sweetened with small amounts of treacle and brown sugar, and the wet ingredients are buttermilk and eggs.

Ferguson was accompanied at the final bake-off at the National Ploughing Championships in Tullamore, Co Offaly by her husband Damien and sons Paddy (three weeks), Charlie (2) and Johnny (4).

“Because the kids eat it, I bake brown bread at least three times a week. I do it with the kids – it fills an hour – and I try to make it as nutritious as possible. I’ve been using quail eggs from our neighbouring farmer, Michael Higgins, as they are more nutritious and give a lovely rich flavour.”

More than 500 entries were received for the competition and after a series of regional heats, eight bakers went through to the final rounds at the Ploughing Championships this week.

Ferguson was originally scheduled to take part in the second of two live bake-offs in the Aldi Marquee, on Wednesday, but her heat was moved to Thursday after the weather related cancellation. Winning that round meant that Ferguson had to bake again in the final on Thursday afternoon.

“I didn’t even have enough ingredients with me. I thought, sure I won’t be getting through to the final.”

Ferguson, a sales and marketing executive, previously worked at The Irish Times and took redundancy from equine clothing manufacturer Horseware in May of this year.

Her bread will now be manufactured commercially by Joe Stapleton from Stapleton’s Bakery in Roscrea, Co Tipperary, and will go on sale in Aldi stores in December. The competition is sponsored by the retail chain, in association with the National Ploughing Association and the Irish Countrywomen’s Association.

The competition was judged by Peter Bough, buying director at Aldi, Bernie Brennan of the Irish Countrywomen’s Association and Eileen Brennan of the National Ploughing Association, who commended Ferguson for her loaf’s “ traditional appearance and perfect texture”.

“They’re the real winners; they had to taste 500 loaves of brown bread – without butter,” Ferguson said.

The runner-up in the competition was Samara Ward from Inver, Co Donegal, who won Aldi vouchers worth €1,000. In third place was Vivienne Rigley from Ballickmoyler, Co Laois (€500 vouchers) and in fourth was place was Mary O’Neill from Newtownmountkennedy, Co Wicklow (€300 vounchers).

I’ve always told my firefighter Dad 'I love you' as he leaves for work, just in case
9