Do you like your craft beer clear or hazy?

Beerista: Galway Bay’s Clear Intentions IPA pushes back against the ‘race for haze’ 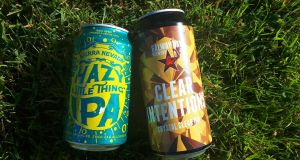 Sierra Nevada’s Hazy Little Thing IPA and Galway Bay’s Clear Intentions. The ever-changing face of the IPA style has spurned a kind of pushback, itching for a return to the original IPA.

Like the craze for insanely spicy hot sauces, the appeal of the IPA “bitter bomb” seems to be losing its hold. The obsession with IBU (international bittering units) – which you often used to see listed on beer bottles – has faded with more of a focus now on balance and hop flavour. And while IPAs were often marked down for not being bitter enough, now an IPA can mean anything from fruity and smooth to light-bodied and crisp, so long as there’s lots of hops thrown in.

The ever-changing face of the IPA style – the latest iteration being the Brut IPA, which mimics the dry, clean characteristics of champagne and which you’ll hear more about over the coming months – has spurned a kind of pushback, itching for a return to the original IPA.

“In the race for juice and haze the classic IPA has been sidelined,” says Galway Bay brewery on the can of their latest beer Clear Intentions. So while the majority of craft brewers are making hazy beers these days, Galway Bay is making a point of releasing a “crystal clear” one, and hoping perhaps to remind drinkers of the kind of craft beer that first won them over.

Clear Intentions has a lovely fresh mango aroma and has lots of tropical fruit flavour. It is full-bodied, at 6.4 per cent, and the bitterness is restrained and well balanced. Is it classic IPA? Apart from being clear, the malt profile is quite subtle and you could argue that it tastes like a northeastern IPA (traditionally fruity, soft-bodied and hazy) that has been cleared. Either way, this is a very good beer.

If you prefer your beers cloudy, have a try of Sierra Nevada’s new Hazy Little Thing IPA. This also has lots of tropical fruit, has low bitterness and is hazy – as opposed to murky – and is very drinkable so you’ll hardly notice it’s near 7 per cent alcohol content.

The Irish professor involved in introducing European animals to Australia
7