Georgina Campbell awards: ‘Too many disappointments’ in 4- and 5-star hotels 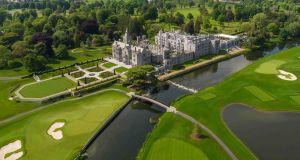 Adare Manor has been hailed as the best hotel in Ireland while the Strawberry Tree at Brooklodge has won the gong for best restaurant at the 2019 Georgina Campbell Awards unveiled in Dublin at lunchtime on Tuesday.

There was good news for the Marker Hotel in Dublin, too, after it went home with the Business Hotel of the Year while the Newcomer of the Year award was presented to The Foyle Hotel in Moville, Co Donegal and its chef Brian McDermott.

The awards ceremony took place at Bord Bia’s headquarters in Dublin and Campbell said the “pace of change, rising standards and the sheer volume of great new businesses opening - especially in Dublin and other cities” had made the selection process this year “tougher than ever”.

She pointed to the addition of a Street Food Award and the growing popularity of casual dining but stressed there was “no sign of fine dining disappearing” and argued that there were “times when something special is needed and our best classically trained chefs are well able to deliver superb contemporary ‘fine dining without the fuss’. She said this was “increasingly, and excitingly... morphng into a refined gastro-pub experience”.

There were smiles on the faces of gastropub group owners Ronan and Jennie Sweeney of the Balloo Inns in Killinchy, Co Down, as they were crowned Hospitality Heroes in recognition of their special contribution to Irish food and hospitality while James Coffey of the Park Hotel in Kenmare, Co Kerry won the Chef of the Year award. Pot Duggans in Ennistymon Co Clare won the Pub and Atmospheric Venue of the Year award.

Campbell hailed an increasing number of “high-end ethnic dining destinations” and said seafood was becoming more popular with “sustainable seafood is making its mark”. She also pointed to “full vegetarian and vegan menus [which] are now offered in many mainstream restaurants where just a single dish was once the only choice.”

Addressing the summer heat wave, Campbell said it had led to boom times for sellers of drinks and ice cream but had seen restaurants attract less business in high season. She said the European Region of Gastronomy 2018 designation for Galway and the West of Ireland was “a huge achievement” which had led her to award “a special three-in-one Spirit of the European Region of Gastronomy Award this year, to illustrate the value of different types of business working together”.

The winners of that award were the Twelve Hotel in Barna, Gannet Fishmongers in Galway and Beechlawn Organic Farm in Ballinsaloe Co Galway. Also in Galway, the Outstanding Guest Experience was deemed to be found at Tig Congaile on Aran’s Inis Meain and the Street Food award went to the Misunderstood Heron, near Leenane, Killary Harbour.

Meanwhile, parents would do well to check out Michael’s, in Dublin’s Mount Merrion which won the Family Friendly award while the best ethnic restaurant was found to be the much talked about Ichigo Ichie in Cork.

The awards have been running for 20 years which makes them, Campbell says the longest-running independent food and hospitality event in the country. Locations are judged through anonymous assessments undertaken by Campbell and her team. According to Campbell while she and her team had enjoyed many good experiences in the judging process this year, there were “far too many disappointments in all areas and all kinds of establishments”.

She said the least satisfactory experiences tended to be in 4 and 5 star hotels and suggested that “problems are often down to simple things that could easily be fixed, plus a lack of hospitality (which often means lack of a host) and poor staff training.”

Campbell described rising hotel prices as “worrying” especially in Dublin and she warned that the hospitality sector was “in danger of losing our hard-earned reputation as a value destination” and she pointed out that “already frighteningly high prices” were “often hiked further for events”. And she called on the Government to retain the current 9 per cent VAT rates for the hospitality sector in the Budget “in order to help this important sector to continue to support our recovery from recession - which is far from complete - and to face challenges outside its control, notably Brexit.”

11. Business hotel of the year
The Marker, Dublin

17. Hideaway of the year
Dunnanelly Country House, Crossgar, Co Down

26. B&B of the year
The Castle, Castletownshend, Co Cork