Staying local: The new wave of chefs cooking only what grows around them 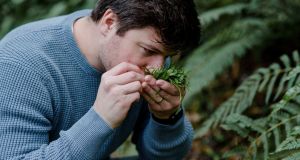 We all now know we’re meant to eat local and seasonal. It makes sense. Eat what’s around you, as people always have. Long before meat took over as the culinary enemy number one, air miles were the main target. And rightly so; they are still a big problem.

It has become de rigueur for any chef or cook worth their salt to source as much as they can from the area around them. But local sourcing is not always as easy as, well, not sourcing locally. Menu margins and profits make the food world go round. But at what cost to the earth?

A new wave of cooks and business owners are focusing on local sourcing in a more thorough way than we’ve seen before. It’s not simply a tick-box exercise adding a few Irish producers to the menu; this lot are embracing a new wave of hyper-local sourcing, hoping to change the way we eat.

Dee Kelly was working in cafes before starting a pop-up business, Grálinn, with her partner and chef Matteo Griscti. “Part of the reason we started the business was that we saw so many avocados being used when we knew that was so wrong. But in cafes, you’re often at the mercy of people and their preferences. Our business plan was simple. It couldn’t cost the earth, and we didn’t want to be a cost to the earth. We wanted to do affordable food that has as little impact as possible.”

They are now based on what they call their “mecca” Elmhurst Farm, a smallholding nestled between Glasnevin and Ballymun. Here, they run supper clubs using what they can from the farm, sourcing the rest from McNally’s Farm in North Dublin. They haven’t gone full hyper-local yet though, as Kelly admits they still use a squeeze of lemon (organic from Spain), and used Wye Valley English asparagus when it was in season – until they found out about Kiki’s asparagus farm in Kildare.

“You can get real snooty, but it can’t really always be an all or nothing thing, as long as you’re moving forward that’s the best approach.”

While Grálinn is lucky to have found a home on a farm, what’s involved if you want to start growing for yourself? Restaurateurs Margaret and Joe Bohan headed down this path for the first time around 2015. They now grow as much as they can for their busy Galway city restaurant Dela.

“There is simply no comparison in taste, freshness and nutrition when you grow your own. Our veg is harvested in the morning and on your plate in the evening,” Margaret says. But “it is not a cost-saving exercise. We do it because it forms a major part of our ethos and provides a roadmap for our chefs in devising their menus. It would be far easier to buy in this produce, but we didn’t want to be a paint by numbers restaurant. This is our stamp on the restaurant.”

It’s a far cry from negotiating prices with a sales rep, which can be a big part of some chefs’ jobs. “We do everything ourselves, from seed ordering, germination, ground prep, sowing, planting, weeding and harvesting. We feel it’s important to be hands-on. It makes us very proud to see our own produce on the plate after the whole process.”

Joe says the benefits are bigger than their restaurant. “We are only one generation away from when growing your own was commonplace and probably a necessity. We felt it was something important to do for ourselves and our kids.”

Hotelier Richard Fitzgerald cites similar reasons for making the leap into hyper-local for The Woodlands Hotel in Adare. He says that his family were very conscious about where their food was coming from, but realised that the hotel was not. “Where possible we sourced as locally as we could but it was so difficult to get the fruit and veg. While there was stuff growing locally, they weren’t doing the breadth of what we needed.”

So two and a half years ago, Fitzgerald and his team set about growing what they could for the hotel. “Come summertime we’re up to about 75 per cent of our fruit and vegetables coming from our own gardens. Even in winter, we have a lot of vegetables, kale, root veg. We probably drop to 60 per cent then, but it’s still significant.”

They are on year three of their own garlic “the flavour of it! You’re using one clove where you might have used three or four before”. It’s not just a business decision for Fitzgerald either. He wants his children to know what he knew.

“People have to learn about food again. We were used to having chickens in the house and growing our own food. It’s great to see it happening again. It’s so important for us to educate our children if we can.”

Jordan Bailey, chef at “all-island restaurant” Aimsir in Kildare, which was recently awarded two Michelin stars, has taken hyper-local to another level. The only non-Irish ingredient they use is some sugar; everything else comes from within Ireland.

Originally from Cornwall, Bailey has worked in many of the top restaurants around the world, most recently Maaemo in Oslo, a ground-breaking three Michelin starred restaurant where the entire 20-course tasting menu is sourced locally.

“Before going there, I had never worked that way or never thought in that way. Only sourcing products from within Norway gave me a bit more focus in the kitchen. There are a lot of ingredients in the world, spices, fruits or whatever. But because you’re not sourcing things from around the world, it forces you to be more imaginative and more inventive and creative with ingredients, trying to get certain tastes and textures.”

The menu at Aimsir is far removed from most tasting menus of the last few decades, which often focused on exotic ingredients from far-flung places. For Bailey, it’s all about how close he can be to the ingredients.

“The beds you see as you come into the restaurants are all those things that don’t transport well, that are best when they are picked that day, or an hour before service, or things like flowers or garnishes that you can go out and grab half an hour before.”

Getting out there and meeting farmers is also very important. “We were at a farm in Ballymore Eustace to see the wheat we use for our bread, and all along the hedgerow as you enter the farm there was pineapple weed growing.” Bailey asked the farmer if he could have it as an ingredient, and it ended up on the menu.

Theresa Storey runs a small artisan preserve company run called The Green Apron in Limerick, where they grow all their own ingredients. “I’m a botanist so I’m always growing: fruits for desserts, herbs, lots of medicinal,” Storey says. She read a book by Barbara Kingsolver called Animal Vegetable Miracle, which sparked the idea that she could eat very well hyper-locally in Ireland. But what about tea?

With her botanist background, Storey realised there was no reason we couldn’t grow tea here. “Tea is not as exotic as you think; it’s only a Camellia. I’ve grown lots of exotics like bananas in the greenhouse. I knew (we could do it) if we could get the conditions right and the right variety, because some are suited to hotter weather.”

Storey attended an intensive one-day growers’ course on a tea farm in Cornwall, and now she’s growing a variety specifically suited to Northern European climates. “We’ll see how good she goes. It will take four years before you get any reasonable production.” Hopefully, it will be time to put the kettle on for a proper cup of Irish tea before we know it.