The way we were: DVD players, landline phones and no social media reminders for birthdays 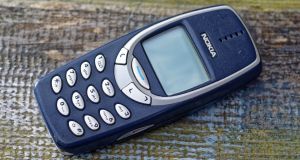 A nokia 3310 mobile phone, which was first Introduced in 2000. Photograph: iStock

It's 20 years since Aldi arrived in Ireland and we're looking back  how life has changed in Ireland over those two decades.

1. While the Web did exist in 1999, it was a new technology and nowhere near as omnipresent as it is now. Then it completely changed the way we communicated, shopped, learned, read, governed and thought.

2. When video cassette recorders became mainstream in the 1980s, they were expensive and enormous. By the late 1990s they were cheap as chips and competing with more slimmed down but still expensive DVD players for our cash. They are both gone to the big video library in the sky, having being replaced by streaming services – both legal and not so legal.

3. In 1999 people still loved stereo systems. They came with record players, a tape deck, radios and CD players. And enormous speakers. First the turntable and the cassette player disappeared, then the speakers shrunk. Then the CD players disappeared and music went from being a physical thing to lots of ones and zeros.

4. Landline phones were all the rage in 1999 and mobiles were something of a rarity, with the ones that did exist being as big as a brick and almost as stupid.

5. It is hard to believe it but there was actually a time when you had to remember the birthdays of friends and family because there was no social media platforms to remind you. Finding out what had become of exes and people you hated in school required the resources of a private detective, and shouting at people you’d never met because they had slightly different views to you was both tricky and kind of mental.

6. Cataloguing your life in pictures – moving and still – was expensive and difficult. You had to take pictures and then leave them in to be developed? There was mystery, there was excitement. There were lots of rubbish pictures.