My tribute to culinary Beirut, where West meets East 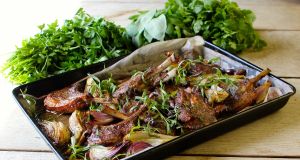 A few lamb chops, smoky from the grill, will take you from Ireland to Beirut in a heartbeat

Last March I went to Beirut – a stunning place to be at that time of year. There are green almonds and broad beans everywhere you look, as well as a vast array of bananas for sale on the sides of the roads.

We arrived in the middle of the night and woke in the morning to the buzz of traditional manoushe stalls (which serve the flatbread heavily painted with zaatar oil) jostling for space next to hipster coffee shops and Chanel stores. The bakeries, too, were a feast for the imagination.

Ever since they were first published, I’ve been the biggest fan of Diana Henry’s books Crazy Water, Pickled Lemons and of Yotam Ottolenghi’s Plenty. So, when the opportunity presented itself, I really had to make this trip, a chef’s pilgrimage. Here the food of the Middle East meets the Mediterranean and north Africa, and it is, to my mind anyway, the single most exciting culinary area on Earth.

One night as we toured the Lebanese capital, we found ourselves in an Armenian suburb filled with authentic cafes and restaurants. We ate different kinds of hummus, wonderful salads such as the eggplant-and-fresh-mint one below, mama ganoush (made with courgette instead of aubergine, as baba ganoush would be, although here I’m using beetroot instead) and pocket-sized cucumbers.

While we are on the subject of hummus, let me set the record straight: only certain hummus has garlic in it. It was a eureka moment when I realised that. But, then again, the world of food is so vast that there is always something new to learn from it. You might be surprised to discover that, traditionally, in Beirut, garlic is often not included in the type of hummus we know best, with chickpeas, tahini, lemon juice and olive oil.

The Middle Eastern shops in Ireland sell the very best tahini, so don’t even think about buying it from anywhere else. Add a few lamb chops, all smoky from the grill, and it will take you straight to Beirut in a heartbeat.

Method
1 In a large bowl, toss the aubergine in a bit of salt and oil.

2 Using a griddle pan or a barbecue, cook the aubergine for two to three minutes on each side until you have good, clear char marks.

3 Remove the aubergines from the grill and put them into a large bowl. Toss through the garlic, chillies and lemon zest. Season with salt and pepper.

4 Add half of the mint and parsley. Mix evenly together.

5 Spoon the Greek yogurt onto the centre of a suitable serving plate.

6 Place the griddled aubergine on top and finish with the remaining chopped herbs.

2 Generously coat with good quality olive oil. Season well with sea salt and black pepper. Add the oregano and other spices and toss everything together on the tray to make sure all ingredients are well coated with the seasoning.

3 Cover the tray with foil and put in a preheated oven at 180 degrees Celsius. Cook covered for 15 minutes.

4 Remove foil and return to oven. Bake for a further 15 minutes.

5 Remove from the oven and serve with rice or salad.

2 Blend on high until it is all incorporated into a smooth paste. Turn the processor down to medium and slowly pour in the oil. Season generously with salt and pepper.

3 Serve as a dip with breads, or in a salad. It is also delicious with lamb.

Shingles: the facts and myths
10