Shark-catching off the coast of Ireland

From the Archive: Angling expert Richard Burrows reported on the sport of shark-angling in his Irish Times column 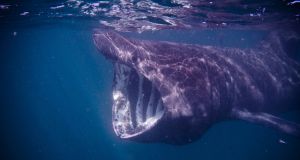 There are 71 species of shark in Irish waters. Photograph: iStock

On October 6th, 1890, a report ran in The Irish Times about the Marget, a ship that had just arrived in Sligo from Norway. “While one of the sailors named Ole Oleson, was playing on deck with a Newfoundland dog, the latter in its frolic jumped against Oleson and the ship giving a lurch at the same time, the sailor fell overboard. A buoy was thrown him, and he succeeded in getting hold of a patent log and a boat was put off to him, but he suddenly disappeared, and it is supposed he was bitten by a shark, as a number of them were seen following the ship for days afterwards.”

News of sharks is relatively rare on Irish shores, despite the fact that according to the New Red List of Cartilagious Fish published in 2017, there are 71 species of shark in Irish waters. The porbeagle shark is critically endangered in Irish waters. Porbeagle numbers collapsed in the 1950s and into the 1960s due to over-fishing, but ever after that time, they were being fished for sport on the west coast.

In the newspaper on September 10th, 1973, George Burrows reported from Galway details of the ninth Sea Angling Festival, where gannets appeared to be catching as many fish as the anglers were between Blackhead and Aran. “In the clear water below, one could see tens of thousands of silver mackerel moving, and overhead gannets every now and then positioned themselves for aerial assault,” Burrows wrote. “Basking sharks lazily showed their fins as they browsed for plankton.” But it was sharks the anglers were after, “the porbeagle and blue sharks sought by the anglers were nowhere being caught for some hours in this vast aquarium. The boat skippers talked over the air quibbling in Irish about their shark shortage.”

Twenty-three porbeagles and 14 blue sharks were caught on Saturday of the festival, with one angler, Michael Courage of Poolbeg Angling Club in Dublin catching a porbeagle shark weighing 148lbs. “Why would any shark attack a stationary dead mackerel bait while so many thousands of live ones swim in Galway Bay?,” the reporter wondered. On Sunday, an angler called Richard Conlon of Rathangan caught a shark weighing 166lbs. That was one of 13 sharks caught that day.

The second biggest shark of the day was 142.5lbs, a porbeagle caught by Mrs Paddy Gallagher from Killybegs in Donegal, whose form Burrows had been observing for some time. “In previous festivals I have seen her beaten in terms of physical strength by big sharks,” he wrote, “This year she must have gone into strict training, for yesterday she was smiling victoriously after a struggle that involved almost a half-an-hour of muscle-milking.”

The shark-catching had an unusual feminist angle, Burrows, attested, “Galway is away out ahead in Women’s Lib. The president of this year’s Sea Angling Festival is Mrs Kit Conroy and an ideal president she is, bringing a warm, womanly touch to what is commonly regarded as men’s sport.”

Conroy was angling on the shoulders of another female shark-catcher, as per this report in September, 1960, detailing an unbelievable catch, “Mrs. WJ Sweeney, of Achill, yesterday caught a porbeagle shark weighing over 260lb, off Achill Sound. With her husband and Mr McCrea, of Belfast, they were fishing out from Keel in a boat skippered by Mr Jim O’Gorman and his son, Michael. The catch is outstanding, as it is the third heaviest specimen ever to be caught in the British Isles or Ireland, and the heaviest ever taken by a woman angler.”

On June 18th, 1966, Burrows was writing about the first blue shark of the season caught in Kinsale, another hotbed of shark activity. “As with the salmon,” he wrote, “there is a powerful thrill in catching a shark, blue or porbeagle. I can’t say anything about mako, for as far as I know there was only one (174lb) caught around our shores last year and that was at Kinsale, by a girl, Roslyn Murphy from America.

Back in 1939, an article appeared in the newspaper wondering whether the influx of sharks to Irish shores could provide the basis for a new industry, particularly around the Blaskets, Aran and Achill. “We think that the Sea Fisheries Association ought to make immediate preparations for the shark harvest. Possibly the new coastal patrol could be used to herd the baskers and their relatives together in order to facilitate matters.”

Burrows had a column in the newspaper in the 1960s and 1970s called Off The Reel. An angling expert, with a fine, almost conversational writing style, he began working in The Irish Times as a reporter in the 1930s, before helping devise a weekly photojournalism paper called Times Pictorial. He died in 1997, on the eve of his 89th birthday.