Salt: It’s all pretty much the same, so why are the prices so wildly different? 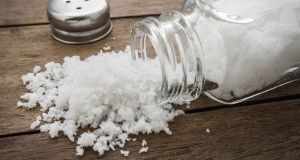 Salts all do much the same thing: bring out flavour in food.

No chef worth their salt would omit that mineral from their cooking. Yet the temptation is to try to cut down at home as we are told that many of us are getting far too much. That might be a mistake, however, given that most of the excess is believed to come from food that is processed or served up in a restaurant or takeaway, according to the Irish Heart Foundation.

Salt is an important nutrient that helps to balance hydration levels and is needed for nerve and muscle function. A pinch of it in the cooking pot can make home-cooked food more appetising.

Salt is mainly sodium and chloride. It’s the sodium that causes the problems and too much can lead to high blood pressure. Sodium levels are not usually mentioned on the packaging, but it is surprisingly similar in the range of products.

Maldon sea salt is about 38 per cent sodium, as is Saxa and Tesco table salt, according to the Food Safety Authority of Ireland.

So if it’s all pretty much the same, why does salt cost anything from 60c for a kilogramme to more than more than €66? The difference comes down to provenance, taste and minerals.

So what can you tell from the label? Sea salt will often mention where it was processed, though there is no requirement to do so. The mid-range Don Carlos coarse sea salt, for example, mentions that it is made with the help of “nature, then sun, Atlantic waters and the sea breeze”. Its fine sea salt is “100 per cent Mediterranean sea salt” that is “produced naturally” in Spain.

The packaging on Irish Atlantic’s sea salt flakes offers more clues as to why it is popular. As mentioned, it contains “valuable sea salt elements: potassium, magnesium and calcium”. It is harvested by hand from the “crystal clear Grade A waters of the Irish Atlantic” on the Beara peninsula in West Cork. The owners describe their production process as artisan with modern, energy-efficient technology to ensure a sustainable, low carbon footprint.

Achill Island sea salt also mentions that it is hand-harvested from the wild Atlantic coastline off Co Mayo. This keeps up standards as well as prices.  It also sells a salt that has been smoked using beech and oak, and has the aroma to prove it.

Oriel sea salt, which is brought out of the sea off Clogherhead in Co Louth, says on the label its product is the only “non-oxidised sea salt on the planet”. What this means is that it uses a process that pumps up the seawater from the seabed without exposing it to the air. The result is a naturally white salt with a fine powdery grain.

Oriel says this gives it a smooth depth of flavour. The packaging has the Great Taste award stamp of approval as well as a yellow and red logo indicting “Protected Designation of Origin”, courtesy of the European Union.

PDO products have to be prepared using traditional production methods in the area. The raw material must be from the area whose name the product bears. So Oriel salt comes from the sea at Port Oriel. It is a prestigious mark that takes time to earn and few products here have.

Pink Himalayan salt, such as that from the Cape Herb and Spices brand on sale in Dunnes Stores, gets its colour from the trace minerals in it. It comes to Ireland from Pakistan by way of South Africa. Black Himalayan, which follows a similar route from Pakistan, is rich in iron and sulphur.

Cheap table salt often doesn’t say where it comes from, though China is the world’s biggest producer, followed by the United States and India. Saxa table salt, for example, which is a brand owned by Premier Foods in the UK has very little information on its packaging.  The same is true of Tesco table salt.

These are refined salt generally mined from underground deposits. They also have added sodium hexacyanoferrate II or sodium ferrocyanide as an anti-caking agent.

Despite the scary name, food-grade ferrocyanide is not believed to be toxic at these levels despite the presence of cyanide. The salt in the mix is believed to be more harmful to those who gobble vast quantities.

The easy way to avoid overdosing on salt is to stay away from processed food in favour of adding some of the real thing when cooking, whether that is pink, black or white.