Lily’s on Church Street: Wicklow town gets the lovely restaurant it so badly needed

Review: This is a hard-working place where the school of cooking is very much French 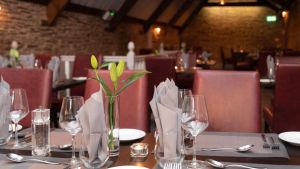 There’s a fairy-tale quality to the old iron oven doors at Lily’s on Church Street, in Wicklow town. One looks like a huge mangle capable of squeezing the water out of the bed sheets of the whole town, or rolling a wedge of dough into a patio-sized pizza. The doors are merely decoration now, set into the wall in the bar downstairs in this restaurant where once people brought their bread to be baked in the town oven.

Now it’s Lily’s, named after the daughter of its head chef, Marc McWilliams. Marc and his brother, Philip, opened Lily’s last winter, and the town got itself a new set of hopes and dreams for this old stone building.

Small towns need the kind of restaurants where ingredients, preferably ultralocal ones, dictate the menu, and with luck Lily’s is going to be that kind of place

Life in this small town was part of my education in food. I wrote about attempts to build a five-mile meal, sourcing vegetables from An Tairseach, the organic farm on the grounds of my old school, the Dominican Convent. At a time when everyone else was looking at planting housing estates in fields with sea views, the nuns had planted vegetables, reared pigs and nurtured a different kind of land development.

I could push a buggy up the hill to the farm shop with its crackling wood stove lit in winter, learn what was in season, and realise the rightness of eating that food at that time, not only for its deliciousness but also because it was part of being grounded in one place.

Small towns need the kind of restaurants where ingredients, preferably ultralocal ones, dictate the menu, and with luck Lily’s is going to be that kind of place.

The building has been pared back to its bones a bit more. I remember some muslin draped on the ceiling in its previous life, but now the corrugated roof is exposed along with the wooden beams. Tables are bare, and the menu is a lean small-town midweek affair, with the emphasis on the kind of value needed to tempt people away from the takeaway-in-front-of-Netflix option and out into the streets of this quiet commuter town.

This is a hard-working place. You can see it in the plate of beets, cooked and sliced several ways: salt roasted, smoked, lightly pickled and mixed with crisp cubes of green apple. These are also in my dad’s gazpacho, a delicious summery bowl of this lovely cold tomato soup as refreshing as a slushy, with watermelon in there too, to give it added holiday feel.

I get the braised Dexter beef shin, a storybook pie that could have come from any of the decades when French roadside restaurants made batches of these every morning

The school of cooking at Lily’s is very much French, with a fillet of hake cooked butter crisp and deliciously fresh. I get the braised Dexter beef shin, a storybook glazed pastry pie of thready beef braised with shards of rosemary that could have come from any of the decades when French roadside restaurants made batches of these in the morning to dish up in the evening with whatever vegetables the market had that day. At Lily’s it’s a quenelle of champ so buttery it’s almost mooing, just wilted spinach and a parsnip cooked to a biscuit crispness on the outside.

Desserts of elderflower panna cotta with strawberries and a dark-chocolate mousse with cherries and honeycomb finish off a meal that hasn’t pushed any boats out or bamboozled anyone with small plates and the ordering anxiety that they bring in their wake.

The three-course dinner will survive, and places like this should thrive when good sourcing and good cooking combine. I’d like to see a few more local suppliers on the menu, but Lily’s is a lovely addition to a town that has badly needed a good restaurant to bring the strands of all the other exciting food in the county together in one delicious place.

Dinner for two with a glass of wine and two desserts came to €64.50

Sofa so good: A guide to sitting comfortably
7

Tanya Sweeney: I wish I’d kept my naked pics. I feared they’d end up in the ‘wrong hands’
Real news has value SUBSCRIBE