The Press Up group has drafted in a London-chef to create the menu for Doolally, its new 220-seat Indian restaurant in Dublin 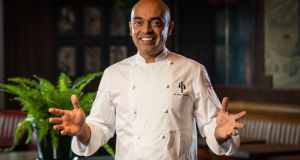 Chef and restaurant consultant Alfred Prasad has been brought in, along with five chefs hired in India, to devise an all-day menu with Indian and Irish influences

Doolally, the latest restaurant offering from the Press Up hospitality group and its first move into non-franchise Asian cuisine, opens its doors in the landmark Richmond Building on South Richmond Street, directly across from The Bernard Shaw pub, on September 11th. With a punchy 220-seat capacity, it is on the same scale as the group’s Temple Bar premises, Roberta’s.

The Indian restaurant’s colonial-inspired interior is another lavish, no-expense spared – and no budget details forthcoming – creation by O’Donnell O’Neill, with copious comfortable booths and marble and wood topped tables and counters surrounded by commodious leather upholstered banquettes and armchairs.

A central bar and counter, along with glass and wood room dividers and walls of greenery, help break up the giant space. There is a vast stretch of open kitchen, including three giant tandoor ovens, intended to make diners “feel a part of the action”, and a wine room enclosed behind glass panelled walls. Wooden fans whir overhead, and relics, well replicas, perhaps, reminiscent of the last days of the Raj are dotted all around.

It’s a picture perfect, cleverly designed and lavishly appointed restaurant concept. So far, so Press Up. But what about the food?

Alfred Prasad, former director of cuisine and executive chef of the Tamarind Collection, with restaurants in Mayfair and Kensington, where he earned a Michelin star, has been brought in as a food consultant for the project, devising an all-day menu – with a few surprises – more about that anon.

Prasad also recruited a brigade of chefs in India, whose work visas are expected to be issued in time for the official opening. “We started off by hiring five chefs who I have worked with in the past, and who I know will bring the right flavour profile and quality that we are aiming for, to lead the team we have hired locally of 10 Indian and non-Indian chefs,” he says.

His brief was “to create an upscale casual offering”. The result is an all-day menu covering all the expected classics, some interesting regional dishes, along with a few unexpected twists.

In the launch menu, Dubliner cheese and Kerrygold butter are name-checked in a dish from the “chaat bar” section of the appetisers, which also include a chicken tikka Caesar salad. Even more surprisingly, the dessert menu includes an Irish cheeseboard option. Knockanore Cheddar, Ballylisk triple cream brie, Milleens, Young Buck and Mossfield original Gouda-style is a lovely line-up of Irish cheeses. But in an Indian restaurant?

In explanation, Prasad says: “We have tried to use the best of Irish produce, that was an important element for me.” He found Kerrygold butter to have the closest flavour profile to traditional ghee, and uses it , and the Dubliner, in a pav bhaji fondue (pumpkin and potato mash, toasted brioche, with kachumber).

Of the cheeseboard, he says: “Not everyone has a sweet tooth, and it’s a great way to end a meal. I felt it would be a shame not to take advantage of the fantastic dairy produce, including cheeses, that we have available in Dublin.”

He has another justification too. “The wine industry in India has taken off in the last decade and as a result, both in India and in Indian restaurants overseas, there has been a shift from just beer and curry, to discovering regional Indian cuisines and pairing them with wines as well.”

The drinks menu also features cocktails, some with an Indian twist, devised by mixologist Marius Nitu, a selection of non-alcoholic lassis and sharbats (sherbets), and a full bar.

Prasad, whose late father was a doctor who spent almost a decade working in hospitals in Ennis and Dublin, made several pre-opening visits to Dublin from his London base, and will continue his work with the brand after the opening date, with the menu expected to continue to evolve, with the arrival of the five chefs from India.

Doolally will open seven days a week, noon to 10pm weekdays, and 11am until “late”, Saturdays and Sundays. Lunch service runs until 3pm, with small plates and appetisers on offer from 3pm-5pm, and dinner from 5pm.