Reading labels: Bagged is not the most appetising choice, but it sure is convenient 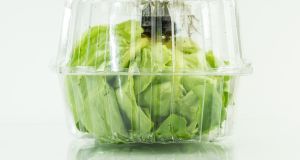 The best salads are made from leaves grown yourself or locally. Photograph: Getty

The great unwashed need not be part of your life any more, unless you want it to be. We’re talking bagged salads, of course. These tend to come as “washed and ready to eat” or “ready to wash”. A rare packet does not say, but those are best washed. So what does washed mean?

For the consumer, a washed salad saves time and is convenient. For the producer, after the initial outlay on expensive machinery to do the job, it means shelf-life can be up to 50 per cent longer.

Take SuperValu’s Crispy Mixed Salad from Willowbrook Farm in Northern Ireland. The bag contains “green and red multi-leaf, lambs lettuce and frisee”. Helpfully, there is a picture on the back of what each leaf should look like.

Multi-leaf is a type of salad developed to cater for the demand for smaller, softer leaves. It is a favourite with producers because each step in the process, including sowing, harvesting and processing, can be done mechanically. It all helps to keep the price down.

With one slice, the plant splits into small leaves, all of similar size ready to be washed. That is done using a solution containing chlorine to remove any pathogens before being sealed in a plastic bag. (There have been issues with e-coli and salmonella in bagged salad elsewhere, though an Irish survey found local produce conformed to high standards.)

The leaves are then dried and packaged in bags that have low levels of oxygen and higher levels of carbon dioxide. Once you open the bag, the spell is broken and the decay begins.

This added shelf-life, however, means that the salad on sale does not have to be Irish to be “fresh”. Willowbrook Farm is in the North but the bag says nothing about where the leaves are from. When the product is Irish, the packet usually says so loud and clear.

So it is with Tesco’s Irish Little Gem Lettuce, which has a flag, a Bord Bia Origin – Ireland mark and a stamp on the front saying “country of origin: Ireland”. Tesco’s rocket also has a flag, but beware as it is simply “packed in Ireland”, which means the leaves were put into a plastic bag here. An almost identical product on the shelves in Tesco stores in the UK, which were “packed in the UK” contain leaves from Italy. This highlights the unwritten rule of provenance: if the produce was grown here it usually states so clearly on the packet. The surprise is that so few of the leaves on sale seemed to be from Ireland.

Florette salad bags don’t say where the salad is from, but it does note that it is “farmer owned”, which is encouraging. Those bags also have a “LEAF marque” hidden on the back of the packaging. This mark indicates that the grower is part of an organisation of farmers who aim to grow the food sustainably and with care for the environment. (LEAF stands for Linking Environment and Farming.) The growers seem to be mainly farmers in the UK and Italy.

Not mentioned on the packet is that Agrial, which owns Florette, has a policy on combating slavery and human trafficking, which are common in the industry.

What every packet has is a nutrition panel. These serve to highlight the different nutritional value of different salad choices and the importance of mixing it up. Florette’s baby leaf mix, for example, has almost as much protein as fibre at 2g and 2.3g per 100g. There’s no fat and just 1g of carbohydrate. SuperValu’s mixed salad has 2.5g of carbohydrate and just 1.1g each of fibre and protein.

Macronutrients aren’t the whole point, however. Tesco’s Watercress, spinach and rocket packet shows that 100g will supply 40mg of vitamin C. An almost identical bag from Lidl brand Meadowlands doesn’t mention vitamin C, though it is likely to have just as much. It does, however, mention that 80g of the salad counts as “one of your five a day”, a reference to the five portions of fruit or vegetable one should eat to remain healthy.

The very best salad leaves to eat are those you have grown yourself without use of pesticides. Fresh from the garden, they are rich in nutrients and flavour. The next best have been grown locally and are still attached to their roots.

The final option is bagged salads. They don’t taste as good and, given that they are not fresh out of the ground, will not be as nutritious. They are still a handy option and a reasonable way to add greenery to any diet.

Lockdown midterm guide: Get over the midweek hump
5