How to make the perfect boxty

Celebrate St Patrick’s Day by cooking up a batch of this traditional potato bread, with help from the experts 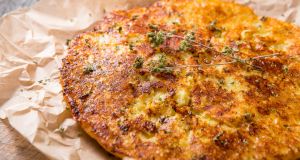 ‘Boxty on the griddle, boxty in the pan; if you can’t make boxty, you’ll never get a man.’ Photograph: iStock

These potato cakes, known in Irish as bacstaí (derived from either bácús, meaning bakery, or arán bocht tí, or bread of the poorhouse – no one seems quite sure), are particularly popular in the north-west of the country, where they take a variety of forms, from griddled pancakes to baked wedges of bread.

They’re similarly versatile in the kitchen – the internet assures me that boxty can be made with dried fruits and sprinkled with sugar or boiled and served with custard, while in Irish pubs around the world, they’re made into quesadillas and filled with curry.

But, like many such humble staples, I reckon they’re best served simply, paired with smoked fish or sausages perhaps, or as part of a carbilicious fry-up. They’ve even inspired poetry, of a sort: “Boxty on the griddle, boxty in the pan; if you can’t make boxty, you’ll never get a man” – though, frankly, I wouldn’t be in rush to share mine with anyone, let alone someone too lazy to make their own.

As with many traditional recipes from these islands, from Irish stew to cullen skink, boxty should be made with floury, sometimes known as mealy, potatoes – the sort that explode into billowing clouds of mash, rather than melt obediently into silky-smooth pommes puree. Waxy potatoes retain their shape and their texture too well, and turn this into something more like a rösti; starchier kinds give a lighter, fluffier result.

Kerrs Pink and ¨Golden Wonder are ideal, though the more widely available Roosters will also work well, and even all-rounders such as Maris Piper, Desiree and King Edward will be fine; just avoid anything sold as a salad potato.

Darina Allen, in her book Irish Traditional Cooking, includes a recipe given to her by one Granny Toye of Clones, Co Monaghan, which instructs readers to squeeze the water out of the potatoes before use, and let it sit for 20 minutes until the starch sinks to the bottom. This can then be stirred back into the dry potatoes as a binder, and the liquid discarded, making her boxty the crispest of them all.

Interestingly, Colman Andrews claims in the Country Cooking of Ireland that potato starch was once also used to stiffen shirt collars. Happily, she also doesn’t bother with peeling, which both saves on a job and gives the finished dish more flavour – or at least that’s the excuse I always use.

The recipes I try are split between those from Toyes, Elisabeth Luard, Rachel Allen and Clodagh McKenna, all of whom use just raw potato; and Diana Henry and Donal Skehan, who both use a combination of cooked mash and raw spuds.

(The much-loved domestic science textbook All in the Cooking, first published in 1946, calls for cooked potatoes alone, though it is labelled as “potato cakes” rather than boxty specifically. Nevetheless, I give it a try, and can confirm that fried potato is delicious in all forms, especially when a lot of butter is also involved.)

Cooked potato gives the boxty a smoother, softer texture, helping to glue the strands together so you need less flour. That said, it does rely on having some to hand – a good thing if there’s a box of leftover mash reproaching you from the fridge (Skehan observes you can also use leftover colcannon, or presumably champ), but you can make very nice boxty without, too.

Toyes’ recipe is the only one not to involve any extra fat, apart from that in which the boxty are cooked. All in the Cooking adds melted butter, or margarine; Henry uses tangy buttermilk, and Rachel Allen and McKenna eggs. The latter also loosens her batter with milk; the former single cream, explaining: “This is my husband Isaac’s take on boxty – he uses cream and not too much flour so they’re good and rich”.

They are indeed – in fact, both Rachel Allen and McKenna’s recipes are almost halfway to Spanish omelettes: pieces of potato suspended in a kind of custard, and lovely they are, too.

I’m taken by the simple approach of Granny Toyes, however; fewer ingredients make for an intensely potatoey flavour. Call me decadent, but I can’t resist adding a splash of Henry’s buttermilk – the creamy acidity works so well with potatoes, though if you don’t have it, don’t worry.

Toyes uses a bare handful of flour – just enough to stick the potato strands together – while Luard’s flour-heavy formula produces something more like a true bread (a good way to stretch potatoes a little further, if necessary).

McKenna and Henry both add raising agents, but with so little flour in my recipe, I don’t think that will make much difference.

Luard is the only one to bake her boxty, producing a pleasingly chewy, moist flat loaf with a distinct potato flavour. Everyone else fries them on a griddle; butter is better than oil for flavour, though good lard or dripping would also be delicious if such things happen to be available.

Bear in mind Darina Allen’s advice that “it’s much better to cook boxty too slowly rather than too fast”. A moderate heat will allow time to build a golden crust and a soft interior; hastiness will lead to a burnt outside and raw middle. Taking things slowly will also give you the chance to give proper thought to the accompaniments, whether that’s bacon, sausage, fried eggs or just a generous wodge of salty butter.

1. Wash the potatoes, coarsely grate them into a clean tea towel or muslin, then wring out as much liquid as possible into a bowl (a glass one will make life easier). Leave this to sit undisturbed for about 20 minutes, and in the meantime spread out the potatoes to dry.

2. Coarsely grate the potatoes into a clean cloth, then squeeze the liquid into a bowl to collect the starch. Carefully pour off the liquid from the bowl, retaining the white, starchy powder that’s collected on the bottom, then add the potatoes, salt and buttermilk to the bowl. Stir in enough flour that the potatoes stick together in loose clumps (you may not need it all).

3. Pour off the liquid from the starch, then add the spuds, buttermilk, salt and just enough flour to combine.

4. Heat the butter in a heavy-based frying pan about 20cm in diameter over a medium heat. When foaming, add the potato mixture and pat it down to fill the pan. Turn the heat down low and cook for about 15 minutes.

5. Gently loosen the edges of the boxty, flip it on to a plate or board, then slide it back into the pan cooked side up, adding a little more butter first if the pan looks dry. Cook for another 15 minutes, until golden on both sides. Cut into quarters to serve. – Guardian.