The first in a series of collections of good things to cook in one pot, casserole or oven tray 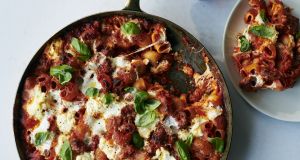 Whether you like cooking, love it or are indifferent to the task, most people can agree that washing a lot of pots and pans after dinner is a drag. Wouldn’t it instead be easier if there were really only one? One saute pan, one casserole dish, one oven tray, one pot? Wouldn’t that be great? Imagine the ease of it, to come home from work and turn on the oven, line an oven tray with foil or parchment, tip on to it some vegetables, some protein, some aromatics and sauce: Dinner, nothing else required!

In this series of recipes, that is the aim: a modest (and beautiful), wide-ranging (and tightly focused) collection of recipes devoted to the celebration of one-vessel cooking, on the hob and in the oven.

The majority will deliver a whole meal in a single pot, pan or oven tray, full stop. For others, you’ll need to add only a vegetable or starchy side dish if you desire one, a salad, a basket of bread. There are vegetarian situations, and vegan ones too, lots of fish, plenty of chicken, plenty of stew. The only constant among them is the desire to make your cooking easier (and wildly delicious) and to deliver you from the sadness of a sink filled with dishes.

Melissa Clark came up with this amazing recipe – a cross between baked ziti and sausage lasagne, with a sauce that cooks the pasta straight from the box or bag. It’s rich with ricotta and crushed tomatoes, and if the Italian sausage adds meaty depth to the sauce, vegetarians can leave it out or use their favourite plant-based sausage instead. Serve it in the pan, with a lot of basil and a shower of Parmesan, chilli pepper flakes on the side.

1. Heat oven to 220 degrees Celsius, or equivalent. Heat oil in a large ovenproof pan over medium-high. Crumble sausage into pan, using a spoon to break it into small pieces. Cook until starting to brown, stirring occasionally, five to seven minutes. Stir in garlic, oregano, fennel seeds and red-pepper flakes (if using), and cook another one to two minutes.

2. Stir in whole tomatoes and their juice, using a spoon to break them up. Add crushed tomatoes, bay leaves and 2 teaspoons salt, and bring to a simmer. Simmer for 10 minutes to thicken slightly.

3. Stir in pasta and 250 ml water and return to a simmer. Continue to simmer for two minutes, stirring frequently to make sure pasta doesn’t stick to the bottom of the pan. Remove from heat, pluck out the bay leaves, and fold in about a third of the mozzarella.

4. Top pasta with remaining mozzarella and dollops of ricotta. Sprinkle with Parmesan, then transfer to oven. Bake until pasta is tender when poked with a fork, and cheese is bubbly and lightly golden, 18 to 22 minutes. (If you’d like a more deeply browned topping, run the pan under the grill forone or two minutes.) Remove from oven and let cool slightly before serving. Top with basil, plenty of black pepper, and more red-pepper flakes, if you like.

We call for fresh mozzarella because it’s so delicious, but the commercial low-moisture variety from the supermarket sometimes melts even better, if heroic cheese pulls are your jam.

Small pasta shapes we love for this dish as much as shells and farfalle: cavatappi, cavatelli, elbow, gemelli, orecchiette, penne, rigatoni and ziti, of course.

This is Julia Moskin’s take on your favourite childhood mac and cheese. It has a powerful advantage, too, for weeknight cooks: There’s no need to precook the pasta, which softens in the oven, absorbing the liquid from the dairy products. Spoon it right from the pan, while watching television.

1. Heat oven to 190 degrees Celsius, or equivalent and position an oven rack in upper third of oven. Use a tablespoon of butter to grease a 9-inch round or square baking pan.

2. In a blender, purée cottage cheese, milk, mustard, cayenne, nutmeg and salt and pepper. Reserve some of the grated Cheddar for topping. In a large bowl, combine remaining grated Cheddar, milk mixture and uncooked pasta. Pour into prepared pan, cover tightly with foil and bake 30 minutes.

Experiment with the cottage cheese. You could replace it with ricotta, for instance, or use a mixture of ricotta and cream cheese.

SPAGHETTI WITH CHERRY TOMATOES AND KALE

In this brilliant recipe, uncooked pasta and cherry tomatoes simmer together in a single pan, so a thick, starchy sauce forms as the pasta cooks. It’s the British cookbook author Anna Jones’s take on a technique “the internet went heart-eyed for,” as Tejal Rao wrote when bringing it to the New York Times, and you can see why. Its smart approach is endlessly adaptable: When you add the kale, you could also toss in a couple of anchovies and a generous pinch of red-pepper flakes. When you season and top with cheese, you could add a pile of fresh chopped herbs, like mint, basil or oregano.

1. Bring a just over a litre of water to a boil. Meanwhile, place spaghetti, tomatoes, lemon zest, oil and two teaspoons kosher salt in a large, dry, shallow pan. (The pan should be large enough that the dry spaghetti can lie flat.)

2. Carefully add the boiling water to the pan with the spaghetti. Cover pan, and bring up to a boil. Remove lid and simmer for about six minutes, using tongs to move the spaghetti around now and then so it doesn’t stick. Add kale or spinach and continue cooking until remaining liquid has reduced to a sauce and the pasta is cooked through. Taste, season with salt and pepper, and top with Parmesan.

For a two-pot, non-vegetarian alternative, cook some coins of fresh sausage while you make the pasta, and add them to the dish at the end.

For a vegan version, whizz some roasted almonds in your food processor, and use them in place of the cheese. New York Times.