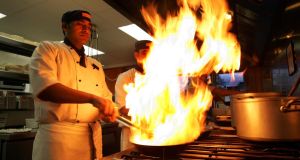 Restaurants are responding to the coronavirus crisis by introducing takeaway menus, organising home-delivery services and limiting payment to contactless methods. In addition, some are offering free or subsidised meals to healthcare workers and those in at-risk groups.

At the Olde Post Inn in Cloverhill, Co Cavan, where a three-course dinner normally costs €66, chef and owner Gearóid Lynch is offering a three-course meal for two to take away for €50. “We have had a huge response – there are lots of orders coming in,” he says. Lynch hopes the initiative will keep him in business as well as supporting his suppliers. “We lost 300 bookings yesterday, and this is coming in the middle of our busy communion and confirmation season.”

In Dublin, many restaurants that would not normally offer a takeaway service are now doing so. Nightmarket, the Thai restaurant and cocktail bar in Ranelagh, Dublin 6, is extending its opening hours from noon to 10pm seven days a week, offering a takeaway menu, and delivering locally for the first time.

The deliveries are being done by some of the restaurant’s part-time staff. “I let them know that there wasn’t going to be a lot of work, and some of them with access to cars agreed to do the deliveries,” says Conor Sexton, who runs the restaurant with his Thai partner, Jutarat Suwankeeree.

Many restaurants, including Mak in Dublin 6, the Chophouse in Dublin 4, Rage in Blackrock, Co Dublin, Mikey Ryan’s in Cashel and La Cucina in Limerick, have launched a drive-through service. Orders can be placed by phone and payment made by card; the customer then calls when they are outside, and the food is delivered to their car or placed in an open boot or on the back seat.

At Michael’s in Mount Merrion, Co Dublin, where a drive-through service is also being introduced, chef-owner Gaz Smith is making some additions to his menu to provide specific dishes that will travel well.

John and Nicola Thomas from Thomas & Co coffee shop and cafe in Oranmore, Co Galway, have introduced a home-delivery service and are doing the deliveries themselves. “Our day-to-day sales are down by 60 per cent, and it’s only getting worse. To survive this we need to be creative, and so we are offering free delivery on any order online or over the phone up to 6pm. We have been contacted by many regulars who are afraid to travel and are now happy to have this service,” John says.

BoCo pizza restaurant, on Bolton Street in Dublin 1, is considering extending its takeaway service to include delivery, and in the meantime it is offering free pizza to people in need. “If takeaway customers have an elderly neighbour, let us know, and we will box one up for them too, on us.”

Many restaurants have introduced new protocols for the delivery of food, with contactless forms of payment being preferred and in some cases mandatory, and orders being dropped at doors rather than handed over.

Emma Sheehan, director of sales and marketing at the Bombay Pantry chain of Indian takeaways, says the company is no longer accepting cash. “It’s card only, ring to order, and drop at door, to limit unnecessary contact but still get food to our customers.”

Brody Sweeney says a similar protocol is on offer at participating branches of Camile Thai Kitchen, where a “contactless” service can be requested when ordering, allowing customers to avoid contact with delivery drivers.

Other restaurants are responding to the crisis in a humanitarian way, offering free or subsidised meals to those in need, and to healthcare workers. Sean Drugan of the Vintage Kitchen, on Poolbeg Street in Dublin 2, is keeping a table for two free for doctors or nurses to avail of a free lunch or dinner at every service, from March 18th. (Reservations must be made in advance.)

In Sligo, Sweetbeat Cafe, which is close to the town’s hospital, is offering medical staff two-for-one on all food and coffees for €1.

In Doolin, Co Clare, elderly people and those with pre-existing conditions at risk of contracting the disease are being offered free meals, delivered to them, by the Hotel Doolin. The hotel’s management was unavailable for comment, but a receptionist confirmed that the offer was genuine, and was being taken up.

Pat O’Sullivan, managing director of MasterChefs, a contract catering company, posted on Twitter: “If you know of any elderly person in the mid-west that may be suffering food shortages let me know and MasterChef will step in and supply meals free of charge.”

Simply Fit Food, a healthy food-delivery service based in Drogheda, Co Louth, is delivering boxes of soup nationwide to people over the age of 65 who may be struggling to get to supermarkets. The box of six soups has a retail value of €22.50 (plus €6 delivery charge), but it is being offered free of charge to those who qualify and request it via the company’s Twitter account. The company confirmed that 15 free boxes had been sent out by lunchtime today.