Restaurants on coronavirus: ‘The phone rang today with another group of 45 cancelling’

There is no official advice against eating out. Please don't desert us, owners plead 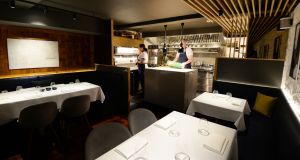 Liath in Dublin’s Blackrock Market did not sell out its tables in a single day, for the first time in more than four years. At time of publishing it still had some tables of six for April. Photograph: Alan Betson

“We have lost €10,000 worth of bookings in the past week alone.” John Healy, general manager of Suesey Street in Dublin 2, believes that the restaurant sector in Ireland is in for “a long bleak year” due to the coronavirus.

Healy is not alone in his concerns. Kevin Arundel, proprietor of The Chophouse in Dublin 4, would have expected the gastropub to be fully booked for both lunch and dinner this weekend, but the postponement of the Ireland-Italy rugby match has negatively affected his reservations book.

“We usually do 70 for lunch and another 70 for dinner on match days, with reservations selling out six months in advance,” he says. In addition, corporate bookings, which he says account for 60 per cent of his business Monday to Thursday, are down significantly.

“We have seen a huge increase in cancellations from large companies. The phone rang today with another group of 45 cancelling.” He estimates that he will lose 150-200 covers in the next 10 days, on top of the match-day cancellations.

Olivier Meisonnave, proprietor of Dax restaurant in Dublin 2, echoes this experience. “We lost 98 covers this week, mostly corporate business dinners and a few lunches. They would have been large parties, from 12 to 24 people, all of them from abroad – the UK, the US, France and Italy.”

Adrian Cummins, chief executive of the Restaurants Association of Ireland, says the virus “is definitely having an effect at the moment, but people are afraid to say what’s happening in their business because they don’t want to feed into any hysteria or panic.”

St Patrick’s Day is usually a great kick-off to the tourist season, but now we have to approach it with caution

The association is urging its members to follow guidelines set down by the Health Protection Surveillance Centre and the Health and Safety Authority, and to “use common sense at the end of the day”.

There are no official guidelines advising against visiting restaurants. “We are open for business. There is no fear in going out and eating in a restaurant. It’s business as usual,” Cummins says.

The cancellations appear to be directly linked to decisions taken by large companies to curb employee travel and entertainment activities, and in some cases to implement working-from-home arrangements.

“There are a lot of businesspeople being told not to travel for the foreseeable future. This will have a big impact during the week, but I am confident that the weekend nights should hold up,” says Ross Lewis, chef proprietor of Chapter One in Dublin.

Irish chef Richard Corrigan says the situation in Dublin mirrors what he is seeing in London, where he has three restaurants. “Right now about a third of our business is gone, at lunch and at dinner. People are starting to look at empty rooms, empty tables,” he says.

In addition to the loss of corporate business, many restaurateurs are concerned about the implications for tourism. Galway restaurateur and chef JP McMahon has “already seen a decrease in bookings. No one has mentioned the virus but I feel that it’s the main reason. I’m worried for Aniar because international tourism makes up 90 per cent of our business.”

Padraig Óg Gallagher, whose Boxty House restaurant in Temple Bar is popular with tourists, says the uncertainty is causing operational difficulties. “St Patrick’s Day is usually a great kick-off to the tourist season, but now we have to approach it with caution and not be overstaffed or overstocked. We now have to approach the summer in a much more conservative manner as numbers could be down drastically.”

Staffing levels are likely to be the first place cutbacks will be felt. “We’d normally be hiring for the season around now but we need to protect the current staff and the business itself,” says Paul Byrne, whose Zuni restaurant, bar and hotel in Kilkenny city celebrates two decades in business this year.

January and February are traditionally lean months in the restaurant sector – already squeezed by VAT and rates increases – and cash-flow issues could arise if the drop-off in trade continues. “We are at the beginning of what could be a difficult time for many people and businesses,” says Wade Murphy, chef proprietor of 1826 Adare.

Garrett Byrne of Campagne in Kilkenny, is concerned about the open-ended nature of the risk. “March and April are going to be pretty tough months for restaurants, but the real worry is if it drags on long term. The vast majority of restaurants won’t have enough money to get through a long-term crisis.”

April bookings at Liath in Blackrock, Co Dublin, one of the hottest tickets in the country, went on sale last weekend, and chef owner Damien Grey says uptake was “slower than normal”, although that might be down to the first day of the month falling on a Sunday. And, to keep things in perspective, they did still book out almost the entire month in a single day (there are a few tables for six remaining, the first time this has happened in more than four years).

Grey has a contingency plan in place should the situation deteriorate. “I have made financial plans in case there is a closure. I have paid all the big bills and put money away, and also told the staff that they need to be prepared.”

Food hygiene and cleanliness protocols have also been ramped up at many restaurants including Liath. “We have changed our cleaning programmes and now spray everything every 20 minutes. The staff have been told to wash their hands after cleaning every plate.”

At Ichigo Ichie in Cork, chef Takashi Miyazaki has introduced additional staff training in this area. “No hand shaking and very frequent handwashing, that was normal, but now we are sanitising our door handles and toilet areas every half an hour.”

Adrian Cummins says restaurants have reported difficulties in obtaining hand sanitiser. If they can find it, it has increased in price.

For restaurateurs, closure, even temporary, would be a worst-case scenario, and one that few are prepared for. “We all rely on cash flow; there’s nobody with gold bars in the safe to carry us through these months,” Corrigan says.

Restaurants need support to stay in business, and with as yet no official advice to avoid congregating in dining-out spaces, every reservation counts. “We would say to everyone, wash your hands, exercise common sense, and please continue to dine out,” says Kevin Hui, managing director of China Sichuan in Sandyford, Co Dublin.

“We are still open for business, don’t shut us down just yet,” John Healy adds.