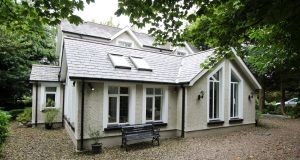 While born into Roman Britain, Patrick, our primary patron saint is credited with bringing Christianity to this isle. His feast day on March 17th is celebrated around the world and he is also associated with shamrocks, which we’re told he used to explain the concept of the Christian trinity. There are some seven million people worldwide named after him and innumerate institutions, churches and streets also carry his name. With many roads, avenues, crescents and streets dedicated to his name, one doesn’t have to travel far to evoke his memory.

First stop has to be on the slopes of Slemish Mountain, Co Armagh where Patrick was first brought to Ireland as a slave and where he worked as a sheep herd. An extinct volcano that even featured on TV series Game of Thrones, it attracts large crowds on a pilgrimage climb to its top on St Patrick’s Day. Nearby is the village of Broughshane, about five and a half kilometres northeast of Ballymena and a similar distance east of the mountain. If you fancied putting down roots in the shadow of Patrick number 29 Quarrytown Road, while not directly named after the saint, is a pretty, three-bed property seeking about €405,000 through agents Ballymena-based Ulster Property Sales.

Fast forward to the seventh century, and a book, Life of Patrick, by monk author Muirchu moccu Machtheni, documents the life of our patron saint. In it, he documents Patrick as having lit a Paschal fire atop the Hill of Slane in defiance of the High King Laoire, who forbid any other fires while a festival fire was burning on the nearby Hill of Tara. If you stood on the roof of number 33 Churchlands, a six-bed, dormer-style detached house of 222sq m, seeking €370,000 through agent SherryFitzGerald Reilly, you might see the hill and on foot it’s a mere walking distance of about a mile.

Back in south County Dublin the town of Dún Laoghaire has paid homage to the saint in Patrick Street, a road that links Tivoli to George’s Street Lower and connects to Northumberland Avenue. The street is a mix of shops, many still with traditional fronts and a variety of residential homes. Number 34 is almost at the Cross Avenue intersection and is a fine, four-bed terraced property of 128sq m. The once small house was bought for €212,000 in 2018 by a builder and has been impressively upgraded and extended. Now an A3 Ber-rated residence, it is asking €745,000 through agents SherryFitzGerald.

Further up the street towards the Tivoli Road end is number 66, a more recently built detached, four-bed of 175sq m that has been used as a commercial space and comes to market with a separate 65sq m shed to the rear. It has an E1 Ber-rating, needs complete reconfiguring and refurbishment and is seeking €650,000 through agent DNG.

In the west St Patrick is said to have climbed the Reek, aka Croagh Patrick, where he fasted for 40 days. The holy mountain is south of Co Mayo’s prettiest town, Westport, and if you manage the climb – one that more than a million pilgrims make annually, according to Teach na Miasa, the mountain’s visitor centre – you will be rewarded with epic views if the weather is on your side.

You could rest your staff at number 10 St Patrick’s Terrace, a residential street secreted off Quay Road, which borders Westport House demesne. The C2 Ber-rated, three-bed, mid-terrace house measures 62 sq m and is seeking €165,000, through agent SherryFitzGerald Crowley. The same agent is selling a similar style of house across the street but one that also boasts views of the Reek from its back garden. It is also larger. Measuring 78 sq m it has a G-ber rating and is asking €185,000.

Just 17 kilometres east, in the county town of Castlebar, number 6 St Patrick’s Avenue is a three-bedroom, end of terrace house in need of complete conversion. The 70sq m property needs everything from heating to rewiring and is seeking €105,000 through Flannelly Auctioneers.

The village of Ardpatrick lies at the foot of the Ballyhoura Mountains, on the edge of the Golden Vale, and is one of the places Patrick is said to have set up a monastery in the 5th century. Just a short drive outside the village is Sandford House, in the townland of Mount Russell, a four bedroom, detached residence set on almost six acres with a separate stable block, tack room and two-storey garage and accessed via a stud-railed tree-lined avenue and electric Georgian gates. It is asking €390,000 through ERA Downey McCarthy.

Carlow town is home to Carlow College, formerly St Patrick’s seminary, Ireland’s second oldest university-level institution and one of many bearing the saint’s name. St Patrick’s Avenue is located across town from the institution. Number 30 is an ex-local authority house that was converted for commercial use as a dental surgery. Measuring 100sq m there are two rooms upstairs that could become bedrooms, subject to change of use planning. It is seeking €128,500 through REA Sothern.

Readers on homeschooling: ‘Kids aren’t missing out and they’re not in a war zone’