Miriam Lord: Will Donald touch the shamrock bowl if Leo has touched it first?

Coronavirus made Leo a Riverdance no-show, saving himself for germaphobe Donald

Taoiseach Leo Varadkar has met President Donald Trump in Washington DC where they discussed the coronavirus pandemic and other issues. Video: C-Span 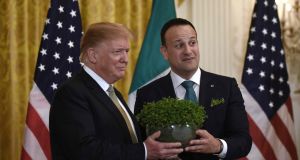 Leo Varadkar presenting a bowl of shamrocks to Donald Trump in 2019. But what will happen this year? File photograph: Olivier Douliery-Pool/Getty

The cracks are beginning to show – everybody can see it. They are monitoring the situation closely in Washington DC now.

Experts differ over the precise time the critical burst will happen (a 70 per cent threshold must be breached) but some predict it could sweep the nation’s capital as early as the end of next week.

At this point “Peak Bloom” will be declared.

There are no plans, as yet, to cancel the big parade. According to the organisers of the National Cherry Blossom Festival “the parade is rain or shine”. That might change by April.

The annual Irish parade to the White House seems to be a rain or shine occasion too. On Wednesday DC health department officials recommended cancelling “non-essential mass gathering” in the city until further notice.

The meeting between the Taoiseach and president Trump will be a select affair.

Major St Patrick’s Day events have been cancelled all over America – the Boston and Chicago parades are gone, while there are doubts over the big one in New York.

The Taoiseach’s first port of call on this year’s truncated St Patrick’s week programme was to have been the venerable Radio City Music Hall in New York for the premiere of a special 25th anniversary run of Riverdance. The significance of this milestone would have been reason enough for him to attend, but the performance was also planned as a sweetener for United Nations ambassadors as part of Ireland’s campaign to land a seat on the UN security council.

However, demands on the domestic front meant Leo and his people had to cancel.

There was a diplomatic representative from every country on earth (over 120 ambassadors among them) in the auditorium for the show, with producers John McColgan and Moya Doherty footing the bill for all the tickets.

The Government is up against the deep pockets of Norway and Canada in the competition for the two-year rotating term. “We’re saying Ireland and our culture sets up apart from the others,” John Concannon, formerly of Leo’s ill-fated communications unit, told us at the show. He is co-ordinating the campaign with the foreign affairs team in addition to his new job as vice-president (development) at NUIG.

Riverdance, and its story of Ireland’s diaspora, was seen as a perfect vehicle to spark discussion among the UN ambassadors from around the globe.

The show went down a treat with them and they joined in the enthusiastic standing ovation at the end.

Images from the last 25 years were shown at the finale, from a bouffanted and blousoned Michael Flattery to the present day troupe of dancers and musicians. Jean Butler, the show’s revered first principal female dancer, took to the stage to help the UN cause.

The choreographer was greeted with huge affection by the knowledgeable New York crowd – this was Riverdance’s eighth stint in Radio City. “I can’t tell you how emotional it is to be here,” she told them.

“We love you, Jean!” shouted a voice from the stalls.

She told the story of how she “learned to dance in this town” thanks to the effort of her Ballyhaunis-born mother who left Mayo for America at the age of 17. And then she stitched in a reminder for their Excellencies in the good seats.

“There is a tenacity and a determination in the Irish spirit that is embedded in our culture, in our literature, in our playwriting, in our drama, in our dance, in our music, in our visual arts – it is part of us and that’s why I think Ireland will bring that spirit to the seat at the UN if they’re elected in June.”

The diplomats, amused by her directness, cheered.

The week-long run is a sell out. However, a quick scan of the house showed some empty seats. That was put down to the coronavirus effect, a huge topic of conversation in the Big Apple, where there hasn’t been the same sense of urgency about the crisis as there is back in Ireland.

Apart from notices in drug stores announcing the unavailability of hand sanitiser, masks and gloves, there didn’t seem a huge amount of concern on the streets of Manhattan. The tourist spots were still very busy, they were packed in like sardines on the boat out to Ellis Island and the Statue of Liberty.

By Wednesday morning, the virus had overtaken the race for the presidency as the top item on news programmes as more New York cases were confirmed. There was much talk of the lack of testing, despite contrary and contradictory claims from the White House.

And so to Thursday’s events in Washington DC. Donald Trump, famously germaphobic, is still trying to play down the situation. He has just one official meeting with an overseas politician this week. Leo Varadkar – and Ireland – is singularly honoured.

The Irish are tremendous at voting.

The two men will have a lot in common when they meet in the Oval Office mid-morning, after the Taoiseach has called to vice-president Pence for breakfast. The media are not invited.

Leo Varadkar, of course, is a qualified doctor, so, like Donald Trump, he will be able to grasp the complexities of the coronavirus situation. The president believes he is an authority on viruses.

“I like this stuff. I really get it,” he said recently during a much-derided and rather frightening visit to the Centre for Disease Control in Atlanta. “People are surprised that I understand it. Every one of these doctors said, ‘How do you know so much about this?’ Maybe I have a natural ability. Maybe I should have done that instead of running for president.”

But will Leo warmly grasp the presidential hand which grasped the hands of a number of US politicians who came in contact with a confirmed case at an event they attended together and are now in self-isolation? Come to think of it, the high-ranking diplomats in New York the other night were still very hands on with their greetings.

The president hasn’t had a test. But he likes them, even if the official ones seem to exist only in his head. “They have the tests. And the tests are beautiful.”

The speaker’s lunch on Capitol Hill, hosted by Nancy Pelosi is also going ahead. The president isn’t going because he doesn’t like Nancy. It’s fascinating to see how things will go. This is the strangest springtime season in Washington, particularly when spring has long passed for the top political chickens in this town, all of whom – Trump, Pelosi, Biden – are in the highest-risk age bracket. Mike Pence is only a youthful 60, so maybe he can do all the touching.

Only one thing is certain. The Cherry Blossom will bloom, as it always does.