Just how good is the most expensive Irish whiskey ever sold? 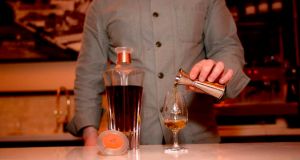 Midleton Very Rare released the most expensive Irish whiskey on Monday. Costing €35,000 a bottle, Silent Distillery Collection Chapter One is the first in a collection of very old Irish whiskeys from Midleton, Co Cork. Besides the eye-watering price, the big question is: what does a €35,000 bottle of whiskey taste like?

I was given the opportunity to try a small sample at a special event in London. My carefully measured drop was probably worth about €2,000 per shot; I made sure I was going to savour and taste it very carefully.

At this price, you are of course buying more than mere taste: rarity for a start, as fewer than 50 bottles of the whiskey will be released worldwide. You are also buying for its age; a single batch of this whiskey was distilled in 1974, and has been in oak casks ever since, becoming ever more concentrated as it evaporates, slowly taking on extra complexity and flavour from the wood.

The Silent Distillery Chapter One is certainly an impressive whiskey. It has a powerful complex nose full of rich toasty oak, old furniture and sweet red cherries and cassis, all underpinned by a subtle note of peat. It draws you back to the glass time after time.

The deeply flavoured palate has elegance, finesse and real character; it is smooth, harmonious and multilayered, with honey, figs, dried fruit, and grilled nuts, along with that same waft of peat.

After a few minutes, it develops a magnificent soft woody enveloping warmth, lingering on the palate for an age. There is no doubt that this is a unique and wonderful elixir.

Can any drink be worth €35,000? I suspect a whiskey made in such small quantities will be bought by some as an investment rather than something to pour when friends drop in – unless you happen to be very wealthy indeed.

The current master distiller at Midleton Very Rare, Brian Nation, acknowledges that “three generations made this whiskey”; he inherited the mantle from Barry Crockett, who “taught me everything I know”.

He describes the whiskey as having a very rich nose with deep, dark spices on a satisfying antique oak base. An earthy note of freshly cut peat, along with chamois leather, that is lifted by a twist of grapefruit. The very old sherry wine seasoned hogshead cask contributes a touch of ripe honeydew melon and red berries, as well as the sweet spices of toasted oak.

On the palate, he finds it instantly rich, with the initial peppery spices slowly softening as the influence of the malted barley shows through. Liquorice root, barley sugar and honey bring some sweetness, just given a little edge by a touch of sherbet. All these flavour notes build on a solid foundation of toasted oak, with a long finish of rich spices and malted barley.

The whiskey is available from specialist retailers in Ireland, the UK, France and the US and two bottles will be sold via a ballot system at The 1825 Room, an online members’ programme.