Niamh Towey has been experimenting with a meat-free diet. It’s not going well 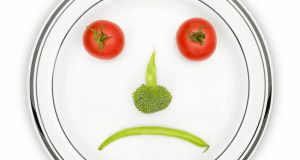 ‘Lunch, though, is where I really faltered.’ Photograph: iStock

Veganism is a cod. That’s what I’ve been saying to anyone who’s asked me how my first week is going. I’ve been whispering it to myself as I rock back and forth in dark corners.

I am hungry, cranky and disillusioned. I have failed many times, mindlessly drinking a cup of tea with – God forbid – a drop of milk in it or ordering a cappuccino with my vegan bowl.

It was naive of me to think I could jump in at the deep end and give up all animal products overnight, I realise that now.

Becoming vegan must be a gradual process in order not to be hungry, or feel like a failure. It involves completely dismantling your traditional thoughts around meal composition, getting your head around substitutes and making sure you replace the meat and dairy with vegetables and fruit rather than carbohydrates and faddy vegan processed foods. I am impressed and amazed by the people who do it, because it isn’t easy.

I threw a grown-up tantrum on Tuesday, crying on the bed about not wanting to go to the gym because I was tired

I needed to be far more prepared than I was. I became complacent after finding vegetarianism relatively easy to get used to and thought a tub of flora spread and a litre of almond milk would see me through till Wednesday.

The reality was quite the opposite. So many of the recipes I had reached for during my first four weeks of meat-free life were now obsolete. The banana bread had eggs in it. The lentil moussaka had milk and butter, the best thing about the black bean chilli was the sour cream and my plans for the Nigel Slater burrata and lentil dish would have to be scrapped. Most of these could be adapted, using flax seeds instead of eggs, nut milk and cashew cheese – but that took another layer of headspace that I simply don’t possess.

I have collated an array of vegetarian cookbooks, and have scouted out the best vegetarian plates in Dublin (the goats cheese salad in Anderson’s in Glasnevin is heavenly, the pizza in Cabra’s new Italian Nero XVI is perfect without meat and Honey Truffle on Pearse Street does salads you would crave) but none of those were any good to me now, certainly not without asking for them to be altered.

Veganism had left me stumped. I knew I had to get breakfast right, so every day I have made Joe Wicks’ chocolate overnight oats – whizzed-up banana, hazelnut milk and cocoa powder infusing the porridge with a naturally sweet, nutty flavour. Served with raspberries and flaked almonds it is delicious, and is a breakfast I normally always make during the warmer summer months.

Dinners were slightly more complicated but I could still make the lentil curry, bean chilli and veggie burgers work, they just missed the ingredients that often made them shine – small amounts of cheese, mayonnaise, sour cream and butter can be transformative, I’ve learned.

Lunch, though, is where I really faltered. Snacks were difficult too. I could no longer have scrambled eggs on toast, and berries and yoghurt were out of the picture.

The caprese sandwich I reached for in the new deli beside work, Greenville on Tara Street, was now off limits and the majority of the vegan options I’ve found consist of dry bread and mushed up chickpea. That would be fine, were I not living off chickpeas as it is.

I threw a grown-up tantrum on Tuesday, crying on the bed about not wanting to go to the gym because I was tired – I have been very tired all week – and hungry.

On Wednesday, I resolved to get things back on track. I tootled off down to Dunnes Stores on my day off with an armory of Deliciously Ella recipes to prepare for. I had the basket full of rice paper, flax seed and Linda McCartney vegan sausages in the crook of one arm and a flat white in the other. Then I realised . . . a flat white.

This veganism is a pure cod, I said to myself. Can a woman not swan around a fancy Dunnes Stores on her day off with a flat white in one hand and a basket full of nonsense in the other?

Going vegan for a week has made me realise just how omnipresent dairy is in our diet, and how vigilant vegans need to be when cooking and ordering out.

I mean it when I say I have an immense amount of respect for people who follow this diet, and I can see that done right it can have a myriad of health benefits – not least because you will be eating greener, fresher food.

It takes a military level of preparation to do properly; as well as an intrinsic belief that this is the diet for you. I possess a capacity for neither of those things, and I will admit that I have failed at being a vegan this week.

I have one more week left of it, and to be honest, I’m counting down the days.

Niamh Towey is writing a weekly column about cutting meat from her diet – first by adhering to a pescatarian diet, then vegetarian, and now vegan.