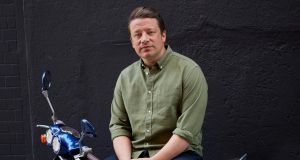 Jamie Oliver has announced that he is opening a new restaurant in Dublin in April. The television chef says Chequer Lane by Jamie Oliver, a 100-seat restaurant on Exchequer Street, “will celebrate some of my favourite comfort food and the menu will be packed with big, hearty flavours and simple, seasonal ingredients: the food I really love to cook and diners love to eat”.

He is opening the restaurant three doors down from Fallon & Byrne on Exchequer Street, taking over the locations of the Petit children’s clothes shop and Boulevard Cafe.

Chequer Lane will be run by Gerry Fitzpatrick – of the Fitzers restaurant family – who teamed up with Oliver in 2012 to open Jamie’s Italian Dundrum. But the new restaurant is being billed as a one-off with a completely new concept for Oliver; rather than pasta and pizza, the menu will focus on “the best of great Irish produce, from fresh rock oysters straight from the bay, beef cooked using a robata grill, and monkfish and scampi”. Chequer Lane’s weekend menus will also feature brunch dishes and Oliver’s trademark roasts with all the trimmings.

The restaurant says its beef will come from Gilligan’s Farm, in Co Roscommon, and its fish, including Carlingford oysters and catches from Hook Head, in Co Wexford, from the Dublin-based Kish Fish. Chequer Lane will also serve David Llewellyn’s cider, from Rush, in north Co Dublin; Des McSwiggan’s Hope Beer, from Kilbarrack in Dublin; and coffee from the Imbibe roastery, in Rialto in Dublin.

The new venture follows the collapse of Oliver’s UK restaurant business last year, with the loss of more than 1,000 jobs. The company, according to some accounts, owed creditors nearly €91 million. Oliver said he tried his hardest to keep the business alive. But after closing some restaurants, injecting more than €13.5 million of his own money into the company and searching for a new investor, he gave up. In all, he shuttered or sold 25 restaurants, including most of his Jamie’s Italian branches in the United Kingdom, along with Barbecoa and London’s Fifteen restaurant.

Chequer Lane is due to create about 30 jobs; a head chef, sous chefs, managers and hospitality staff are currently being recruited.