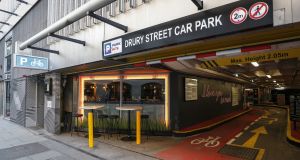 Amy Austin, a new 30-seat wine bar, opens on Thursday just at the entrance to the Drury Street car park in Dublin 2. The newcomer will have 16 wines and aperitifs on tap, and an all-day menu of cheeses and charcuterie, along with a choice of small plates, and daily specials.

The venture is the sixth Dublin restaurant concept from John Farrell, following on from Dillingers and The Butcher Grill in Ranelagh, 777 on South Great George’s Street, Super Miss Sue, which closed in January 2018, and Luna, which went out of business unexpectedly in May of last year.

The new opening replaces a cafe, Sasha House Petite, the lease on which Farrell purchased several years ago. It is next door to the Luna premises, where Declan O’Regan, who also operates L’Gueuleton on Fade Street and Drury Buildings on Drury Street, is believed to be planning to open another restaurant.

Rose OToole, formerly bar manager and mixologist at Michelin two-star restaurant Aimsir in Co Kildare, has been appointed manager at Amy Austin, and the kitchen will be run by Essa Fakhry, previously head chef at 777, and Matt Raynor, who has relocated from London, where he was sous chef at South African restaurant Kudu.

The wine bar has counter seats that run right around the perimeter, including a section with great views out big widows on to Drury Street. An additional central table seats eight. The prime seats will be those directly facing the galley kitchen, which is also where the drinks will be dispensed from.

“I wanted something vibrant. I wanted it to look like a fun wine bar,” Farrell says of the new business, the opening of which was delayed by several months while fire safety certificates were secured. It is expected that most of the business will be from walk-ins rather than by reservation.

Amy Austin will open to the public on Thursday, following a private launch on Tuesday. Initially the opening hours will be 5pm until late, Monday to Saturday, with lunchtime opening being introduced on March 2nd.

On Mondays and Tuesdays, there will be 25 per cent off the entire wine list, and until 6pm every day, any two small plates will be available for €23, or €28 with dessert.

The house wines are Amy’s White (Sauvignon/Vermentino) and Amy’s Red (Merlot/Syrah/Fer-Servadou), both specially blended for Amy Austin by WineLab, and on sale at €6 for a 150ml glass, €20 for a 500ml carafe and €28 for 750mls.

The on tap selection peaks at €13 a glass for Westwell Ortega, an organic white produced in Kent, and Hobo Wines ‘Folk Machine’ Pinot Noir from California. There is also a wine by the bottle list, and a full range of Leitsz non-alcoholic wines.

“Hopefully I’ll get a chance to play around with some of my concoctions and get them on tap as well,” says OToole, whose seasonal cocktails made a big impact at Aimsir.

The food menu has a choice of Irish cheeses (€5/€7) and Continental charcuterie (€6/€7), along with small plates – four cold and five hot (€9-€15) – and one dessert. Specials will be available at lunch and dinner. “We are going to focus on the ingredients and will change the menu as we get them,” Fakhry says.

Carlingford oysters (€9) will be served with a dressing that will change weekly; for the launch it is kimchi bloody Mary. Three fried Dublin Bay prawns (€14) come with garlic toum, bisque and dill. Toum, Fakhry explains, is a “like a cloud of garlic”, made by blending garlic and lime juice and slowly emulsifying it with frozen sunflower oil.

Butter-poached wild Irish turbot with potted shrimp, wild garlic and fermented samphire, is one of two small plates dishes with a €15 price tag, the other being the head chef’s favourite from the launch menu – ossobucco of veal, borlotti beans, roasted cauliflower puree, bacon creme fraiche.

Sous chef Matt Raynor, who trained in Capetown, where he has family connections, moved from London to Dublin just 10 days ago, to join his girlfriend Maggie Kiely, who works at Allta wine bar. “I’m a big fan of pork belly and the Irish pork is amazing,” he says of his launch menu signature dish, suckling pig belly, pickled hispi cabbage, bacon creme fraiche (€14).

Given that Farrell named Luna after his daughter, the question everyone will be asking is – just who is Amy Austin? It transpires that the inspiration comes from a piece of public art in Austin, Texas that struck a chord with Farrell.

In 2010, a local musician, Amy Cook, spray painted the words “I love you so much” as a love letter to her partner, Liz Lambert, on the side of Lambert’s coffee shop, Jo’s Coffee, and the mural became a part of Austin’s urban landscape.

Róisín Ingle: I nearly asked a stranger for her number. It’s the isolation talking
Real news has value SUBSCRIBE