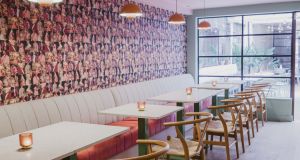 Soup and a sambo, but more interesting

The soup and a sandwich meal just went up several notches in interest and quality with the arrival of lunchtime service at Bobby’s, a new wine bar on Baggot Street Upper in Dublin 4.

Since opening last month, the 70-seater has been drawing a strong post-work crowd, lured in by chef Holly Dalton’s menu of snacks, toasties, and cheese and charcuterie boards, accompanied by an interesting wine list.

Lunch is now also being served, Tuesday to Friday (noon to 2.30pm), and the menu offers three types of sourdough toasties, three focaccia sandwiches and a seasonal salad and soup.

Roast carrot and anise puree, pickled beetroot, baby kale, chard, dill dressing and Cais na Tire cheese crumble with focaccia croutons was the launch week seasonal salad (€7) and the soup was parsnip and apple with smoked almond crumble and chive oil (€4.50). For a tenner you can choose any sandwich and a half portion of soup or salad. bobbys.ie

The Taco Battle at Jam Park, Airside Retail Park in Swords, Co Dublin, on Saturday, February 22nd, is being billed as a showdown between Ireland’s best purveyors of the Mexican snack. There will be six vendors plying their wares (4pm-9pm) and the €40 ticket will get you six tacos and a drink, and a chance to vote for your favourite.

Competing to be named Ireland’s Top Taco are La Cocina Cuevas, The Taco Truck, Fuppin Delish, Órale, Eatery Park and Tacos Don Ron. Tickets are on sale at Eventbrite. Kids up to 12 years of age can attend free of charge and there will be lots of taco-related entertainment including a Mexican bean race, sombrero throwing and a pinata.

Cork and Kerry chefs on the move

There are several interesting chef collaborations coming up this month and next, with Michelin-starred chefs Paul McDonald and Ahmet Dede joining Cormac McCreary in his kitchen at Sheen Falls Lodge in Kenmare, and Bryan McCarthy and Eric Kavanagh doubling up at Greenes Restaurant in Cork and Cahernane House Hotel in Killarney.

The first of the Cork and Kerry alliances is at Sheen Falls Lodge on February 23rd, when Paul McDonald of Bastion in Kinsale will work with Cormac McCreary on a six-course tasting menu with wines, to be served in the hotel’s The Falls restaurant. On March 29th, it will be the turn of Ahmet Dede to join the hotel’s head chef in his kitchen. Dede, formerly of the recently closed Mews in Baltimore, is now planning his own venture in the town, due to open this year.

Both events cost €120 for the six-course menu with wines, and overnight packages are available for €420 for two guests including the tasting menu dinner, bed and breakfast.

A wild ingredient dinner brings together Bryan McCarthy of Greenes Restaurant in Cork and Eric Kavanagh of Cahernane House Hotel, on February 26th. Greenes is the venue and the six-course wild food menu will cost €59. On April 2nd the two chefs will reconvene at Cahernane House Hotel to serve a spring tasting menu. Dinner and overnight packages cost €258, for two people sharing, at both venues with Hotel Isaacs providing the Cork accommodation.

Seán Moncrieff: I’m sick of hearing this is the new normal
7

Fish and chips: How to cook them just like the chipper does
10