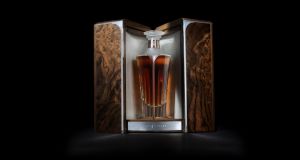 Midleton Very Rare Silent Distillery Collection: collectors are expected to seek out the the 45-year-old whiskey, which costs €35,000 a bottle

A very rare 45-year-old Irish whiskey goes on sale on Tuesday priced at €35,000 a bottle. Only 48 bottles of Midleton Very Rare Silent Distillery Collection Chapter One, believed to be the most expensive Irish whiskey, have been released.

The whiskey, described as being “very rich with deep, dark spices”, is the first in a collection of very old Irish whiskeys to be put on the market by Midleton. There are plans to release six different 40 to 50-year-old whiskies, one a year, between now and 2025.

The first release is a 45-year-old peated single Irish malt created by master distiller emeritus Max Crockett a year before the original distillery closed in 1974. It was part of a series of innovative trial batches, never repeated.

A silent distillery is one that has closed down and no longer distils any spirit, leaving only “unicorn” whiskies maturing in the cellars. They are highly sought-after by enthusiasts and collectors around the world.

The original Old Midleton Distillery in Cork operated from 1825-1975 and Chapter One is the first release from the distillery in 16 years. It is bottled in handblown Waterford Crystal decanters, each individually numbered, displayed in a wooden cabinet by Irish designer John Galvin.

The whiskey is available from specialist retailers in Ireland, the UK, France and the US and two bottles will be sold via a ballot system at The 1825 Room, an online members’ programme.

Nose: The first impression is very rich with deep, dark spices on a satisfying antique oak base. An earthy note of freshly cut peat, along with chamois leather, is lifted by a twist of grapefruit. The very old sherry wine seasoned hogshead cask contributes a touch of ripe honeydew melon and red berries, as well as the sweet spices of toasted oak.

Taste: Instantly rich, with the initial peppery spices slowly softening as the influence of the malted barley shows through. Liquorice root, barley sugar and honey bring some sweetness, just given a little edge by a touch of sherbet, all build on a solid foundation of toasted oak.

Finish: The rich spices and malted barley are slow to fade.

From eating healthily to staying warm, how to treat Covid-19 in the home
2

From yoga to HIIT training, your guide to solitary exercise
7