Georgina Campbell says ‘marked improvements’ being made in Irish breakfasts 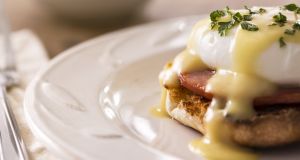 Ireland’s best breakfasts and brunches 2020 have been announced. Photograph: iStock

The best breakfast in Ireland in a five-star hotel is served at Lough Erne Resort in Enniskillen, Co Fermanagh, according to the Georgina Campbell Irish Breakfast Awards, which were announced on Monday.

Eight businesses, from B&Bs to country houses and visitor attractions, were named Ireland’s top breakfast venues at the awards, which are now in their fourth year and are presented in association with Fáilte Ireland.

Arán Bakery & Bistro in Kilkenny city was revealed as the winner of a public vote to find Ireland’s best brunch, and Ashford Castle received an award in recognition of its sustainability initiatives. In addition, awards were presented to producers of traditional Irish breakfast ingredients.

Speaking at the awards ceremony in Dublin, food and hospitality writer Georgina Campbell, founder of the awards, said there had been “marked improvements” in the breakfasts being served in Ireland, especially in the three-star hotel category.

“We are considering more three-star hotels than ever before for an award, and this is really heartening, with huge efforts going into producing a fine breakfast from many business owners and their kitchen teams,” she said. “There have been improvements across the board, particularly in the area of food sourcing and local provenance.”

Food producer awards were made in five categories – for breakfast meats, eggs, dairy, fruit and preserves – to McCarthy Meats in Kanturk, Co Cork; Belview Eggs in Drogheda, Co Louth; The Little Milk Company in Dungarvan, Co Waterford; The Apple Farm in Cahir, Co Tipperary and Filligans in Glenties, Co Donegal. In addition, the Irish Bread Award was given to Rua Deli & Café in Castlebar, Co Mayo for its dillisk soda bread.

A shortlist of more than 30 brunch venues was put to a public vote, which was won by Arán Bakery & Bistro in Kilkenny city. This bakery and cafe, opened 12 months ago by Bart Pawlukojc and Nicole Server-Pawlukojc, serves an all-day brunch featuring their stone-baked breads made with locally grown and milled heritage grains and a seasonally changing menu.

“Brunch is now part of the fabric of Ireland’s food culture. People truly enjoy the quality and variety of dishes on brunch menus across Ireland. So much, in fact, that brunch is now considered one of the most popular meals for people to enjoy “out”. It’s for this reason that we opened the brunch award to a public vote, and we were delighted by the hugely enthusiastic response from food lovers across the country,” Campbell said, adding that the winning cafe had received “a torrent of votes from its loyal customers”.

Irish breakfast menus came under consideration too, with awards being made to the Limerick Strand Hotel and to Lough Bishop House in Collinstown, Co Westmeath. The menu winners were selected from submissions made by accommodation providers in response to an Irish Breakfast Survey recently completed by Georgina Campbell’s Guides and Fáilte Ireland.