Being a vegan is tough: have you ever tried to order a nut milk cappuccino in a country town? 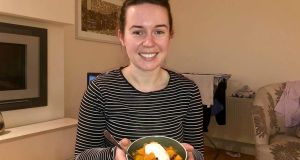 Niamh Towey: 'My second week of veganism went better than the first purely because I threw the rulebook out the window'.

Last week I offered myself up as a sacrifice to the vegan gods by proclaiming their diet to be a cod.

There is a saying at home in Roscommon for someone who’d cut you down without a second thought: “She’d eat you without salt.”

Well, unlike a nice leg of lamb or cheese toastie, I feared the vegans might eat me without salt. They didn’t.

I received lots of kind and encouraging messages concurring that the vegan diet is a hard slog, and is more sensibly done gradually.

Anyways, my stint in purgatory is done with, and today marks my first day with meat back as an menu option after six weeks on the dry.

I’m sitting on my couch with a cup of tea with real cow’s milk – not curdled hazelnut milk – wondering where to from here?

My second week of veganism went better than the first purely because I threw the rulebook out the window.

I told you last week that I failed at being a vegan, but I would like to revise that and say I tried my best within the constraints I encountered.

I ate or drank animal products only when I was out in restaurants or when I genuinely forgot that I wasn’t supposed to.

Any meals I cooked at home were vegan, all the breakfasts I carted around in Tupperware containers were vegan and my freezer is full of vegan quick-fixes to make sure I never had any reason to falter.

What about when someone offers you a cup of tea at their kitchen table – are you going to go asking for the soy milk?

I have missed cheese and eggs the most, but I have survived without them. Knowing how to add character to a meal without them is an asset. A squeeze of lemon or lime, a dollop of mashed avocado or a chopped tomato salsa can often provide a much tastier alternative to a sprinkle of cheese, a blob of sour cream or a yoghurt dressing.

I also found it kept me away from the worst of processed foods such as crisps, chocolate and breakfast rolls.

I don’t regularly eat any of those things, but I would have a soft spot for them on occasion – feeling sorry for myself on an early shift at work, or drifting past the Spar deli counter when hungover.

Having a strict set of rules to avoid that was a good thing – but there were other aspects of veganism I found ridiculous.

Have you ever tried to order a nut milk cappuccino in Ballaghaderreen? Me neither – I didn’t even try.

What about when someone offers you a cup of tea at their kitchen table – are you going to go asking for the soy milk? Didn’t think so.

What about the banana bread recipe? Can you really be bothered making a “chia egg” to bind it together? Please, save me.

As for the cashew cheese, it’s simply perverse.

For all my protesting about veganism, I have been a very happy vegetarian. I have no craving or desire to eat meat again.

But milk? I think I might bathe in it.

Niamh Towey is writing a weekly column about cutting meat from her diet – first by adhering to a pescatarian diet, then vegetarian, and then vegan.