Filmmaker William Desmond Taylor, who had directed almost 60 movies, was shot in the back in his own home 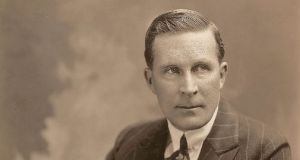 Alfred Hitchcock once asserted that “When we tell a story in cinema, we should resort to dialogue only when it’s impossible to do otherwise”. Yet while a young Hitchcock was still looking to begin his career in the film industry an Irishman who had helped to shape the silent movie era of early Hollywood found his cut tragically short.

William Cunningham Deane-Tanner, or William Desmond Taylor as he would prefer to be known as from 1908, was born in Carlow town in 1872. The second eldest of five children his father was an army captain with the Royal Rifle Corps and a local Justice of the Peace while his mother was a wealthy heiress with ties to Co Tipperary. As a child he was privately tutored in French, German and history but as the family’s fortunes declined from the 1880s onwards the extravagant lifestyle his parents had led had to be curtailed. Ironically, it would be his equestrian lessons rather than his academic studies, (coupled with his athletic bearing) that would help his achieve his first big break into the burgeoning American film industry decades later.

His father had apparently hoped his eldest son would follow him into the military but William had other ambitions. When it became clear he wouldn’t do so his father dispatched him to Harper, Kansas in 1889 where he worked on a “dude ranch” run by Antrim emigrant Francis Turnly. When Runnymede Ranch closed in 1892 following Turnly’s death, rather than return to Ireland the young immigrant left Kansas for Missouri, then Illinois working a series of odd jobs to support himself. In 1895 he got his first taste for the limelight when he joined Fanny Davenport’s touring theatre company where he would remain for the next three years, performing right across the country. Davenport died unexpectedly in September 1898 and Deane-Tanner spent the next year touring with rival theatre companies before a small inheritance, bequeathed to him following the untimely death of his sister Elizabeth, provided him with the means to establish himself in New York City and open his own business.

Partnering with an Arthur J Taylor he set up a furniture and interior decorating business drawing on the knowledge he had picked up while working in the theatre industry. In New York he also began dating Irish-American Ethel Harrison whom he would marry in 1901. Harrison gave birth to their first and only child, Ethel Daisy the following year. After his business began to fail and his debts continued to mount Deane-Tanner made one of the most controversial decisions of his life – he decided to leave his family, his profession and his adopted city behind. Changing his name to William Desmond Taylor he spent the next four years dividing his time between gold prospecting and resurrecting his theatrical career. Travelling through Yukon, British Columbia and the southwestern United States he eventually settled in Santa Monica, California, one of the centres of the burgeoning American film industry.

His talent in the saddle stood to him and he landed a number of roles as an extra in the numerous cowboy movies being produced and directed by the pioneering Thomas Harper-Ince. Taylor’s abilities were recognised and he was given more prominent parts before he signed with the Vitagraph Film Company in 1914. His most celebrated role as an actor, his portrayal of the daring Captain Alvarez in the similarly titled film, earned him a great deal of admiration from his peers. After appearing in 27 movies he turned his hand to directing and soon found himself the toast of Hollywood. In eight years he directed 59 movies included the first screen adaptations of Mark Twain’s The Adventures of Tom Sawyer (1917) and Huckleberry Finn (1920), the latter of which was highly regarded.

He did so despite the fact that he spent a year as an officer with the Canadian Expeditionary Force toward the end of the first Word War. He did not see combat but he was stationed in England and France from December 1918 to April 1919, returning with the rank of major a fact which no doubt would have pleased his estranged father.

His murder on February 22nd, 1922 rocked Hollywood. Shot in the back in his own home in the early hours of the morning, his death remains a celebrated cold case and endless theories abound as to who his killer might have been and what might have motivated them to bring the life of the 49-year-old director to such a tragic end. We’ll probably never know. He may be best remembered for his untimely demise but Taylor left an enviable legacy as an actor and director and his contributions certainly helped to shape the silent movie industry and even Hollywood itself. Today his grave can be found in the Hollywood Forever Cemetery within sight of Paramount Pictures’ studios; so even in death he rather fittingly remains at the heart of Tinseltown.