‘Vulnerable’ returning emigrants: ‘I try not to let my children see me cry’ 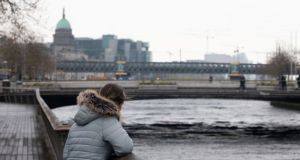 More protection is needed for emigrants returning to Ireland in vulnerable circumstances such as domestic violence, homelessness and illness, a new report has found.

The report was published on Monday and is written by Crosscare, which is a Government-funded agency supporting Irish emigrants and immigrants, and is the social support agency of the Dublin Catholic archdiocese.

An estimated 26,900 Irish people returned to the country in the year to April 2019, according to figures published by the Central Statistics Office.

The study “Coming Home in Crisis” found family was often the compelling reason not only for returning home, but also for originally emigrating.

“I was dying to get out of here. There was no room in our house, and I’d got married so I could leave,” one emigrant told the researchers.

The report said some emigrants chose not to contact friends or family on their return for fear of being judged as a “failure” for returning home in crisis.

Children were often cited as a reason for returning. One emigrant in the study said: “I am not settled yet. I will stay here permanently. If my children are happy, I am happy. I put them first. I try not to let them see me cry. Some days it is hard.”

The researched involved qualitative interviews with 10 emigrants who had returned in crisis circumstances in 2018 and 2019, and 11 support organisations abroad.

“Those who return to Ireland generally face a great deal of stress and physical and psychological burnout,” the report said.

Danielle McLaughlin, policy officer with Crosscare, said the charity had worked with more than 500 people and families per year, including many who have experienced a crisis return to Ireland.

“Many of these individuals and families will arrive straight into homelessness on their return in Ireland without income, family or support networks and are struggling to cope financially and mentally.”

“These obstacles range from administrative challenges and emergency accommodation shortage, to delays in access to urgent social welfare payments and healthcare.”

“One interviewee, a lone parent, returned with three children and spent five weeks moving to a different hostel each night with her children and was denied a rolling booking in one place. She is now in her seventh month in emergency accommodation and is working, yet has been unable to find a rented property to move into.

“Another interviewee waited six months for an appeal against a refusal for social welfare support for his family, and his Irish citizenship was questioned despite presenting his Irish passport.”

Several returned emigrants expressed disappointment and offence over the way they were treated by some social welfare officers in the report.

“The social welfare were no help whatsoever, they would say ‘you need to go there, you don’t have residence’ and one person told me that I should go back to (host country of return). That was crazy.”

Billy Lawless, the Senator with responsibility for the diaspora based in Chicago who launched the report, said there were few more worthy causes than attracting emigrants back to Ireland.

“No returning emigrant should be discriminated against for obtaining the service they are legally entitled to get simply because they don’t the right document or it hasn’t arrived yet,” he said.

“Why should obstacles be there in front of them. “

The report highlighted that successful resettlement in Ireland was a concern and had become a bigger issue as a result of the country’s housing and homelessness crisis.

“Closer attention must be paid to the protection of returning emigrants in crisis and those in vulnerable circumstances. They urgently need efficient access to vital statutory services and supports, including expedited access to stable emergency accommodation, social welfare and medical and psychological care,” the report said.

"Particular attention is also required to ensure the prevention of institutional racism against returning Irish emigrants who are from minority ethnic groups.”

One Australian-based support group for Irish emigrants referred to domestic violence in the report as one of the biggest challenges they face, especially where the person is not yet a permanent resident or citizen and therefore not entitled to housing or social welfare supports. “They struggle financially and rely on charities for assistance,” according to the report.

A US-based emigrant support group noted that the majority of its social care cases are with people with socioeconomic constraints, often with underlying health issues. “Poor health can lead to a loss of employment, driving the person to return to Ireland for health care and financial support,” the group reported.

Participants interviews in the study, six men and four women, were aged from 30 to 70 years old. The emigrants had returned from living in countries including the UK, USA, Canada, Spain, South Africa, Thailand, Libya, Palestine and Saudi Arabia.

The report has a number of recommendations including access to local authority emergency homeless accommodation immediately on return for emigrants in crisis, immediate access to emergency social welfare assistance, help for families to secure immediate school placements for children and free medical care from the HSE for those in urgent need while their medical card applications are being processed.