Irishman in Australia: ‘It wasn’t part of the plan to end up in the emergency department’

‘Never having injured myself in a foreign country before ... I worried I would have to pay hundreds if not thousands of euro for treatment’ 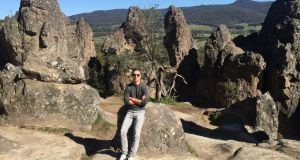 Ciarán D’Arcy from Co Louth moved to Australia in 2018.

It was a mere moment of bone-shattering football-on-finger contact that will be wryly remembered for a lifetime.

Nursing my gruesomely displaced finger in the emergency department of the Royal Melbourne Hospital after the training ground mishap, I sat in nervous anticipation of the doctor’s verdict.

I knew a bad dislocation would be the least of my concerns, but all the while I dared to fear the worst.

This certainly wasn’t part of the plan, having for decades been tantalised by the prospect of trying out the Australian rules code of football. First nurtured through my ritual consumption of deferred Saturday morning highlights shows on TG4 in the early 2000s, my burgeoning interest in what seemed to me an intriguing and exotic sport gained further encouragement in my teens when I received an oval ball and Collingwood jersey from my ex-pat brother who was living in Australia.

You see, the game is less a pastime and more an all-consuming obsession in Melbourne, its spiritual epicentre and my home for the year. So when I arrived to the city harbouring hubistric hopes of impressing the locals with my extemporised (and admittedly unorthodox) AFL skills last October, my lofty ambitions never accounted for a cruel twist of fate that would see a freakishly skewed pass bring an acrimonious end to just my fourth practice session with the local team.

“You’ve broken it,” came the laconic assessment of the young emergency physician from Portadown, Co Armagh, her familiar accent nonetheless a somewhat comforting factor in an otherwise daunting situation. Cue the ensuing relentless gags that an Irishman should know better than to try his hand at the native sport, although I was simply thankful to have resisted my teammates’ offers to “pop it back in” given the diagnosis.

Never having injured myself in a foreign country before, the lament for my poor misshapen finger- not to mention a devastatingly early conclusion to my nascent footy career- was soon trumped by the apprehension of having to pay hundreds if not thousands of euro for the treatment and surgery, which I was told would be necessary.

The realisation of my scant chances of ever successfully retrieving the money through my threadbare backpacker insurance cover made the situation starker yet.

But just then, in the moment of greatest need three beautiful words came to my rescue- “Reciprocal Healthcare Agreement”.

Australia only has such agreements with 11 other countries, with Ireland occupying a seemingly unlikely place among the fortunate few alongside nearest neighbour New Zealand and mother country the UK.

It means Irish citizens who suffer anything from mishaps like mine to actual serious health emergencies receive almost all public care in Australian hospitals free of charge, along with discounts on prescription medicines.

The fact is I could seldom have hoped to do damage to myself in a better health system anywhere in the world- one boasting, for instance, an entire hospital dedicated to cancer care, soon to be complemented by a devoted cardiac hospital.

I was seen to promptly in the first instance at what is a world-leading trauma centre in which broken fingers are but the most trifling of concerns, and the procedure to put a pin through the fractured metacarpal of my right little finger took place within two weeks of my initial presentation.

Being a current hospital employee (albeit in the decidedly unglamorous world of communications rather than any distinguished clinical occupation), I was all the while acutely aware that my emergency department visit and follow-up appointment alone would have cost more than €500- a sum that in one fell swoop would have undone months of scrimping for an eagerly anticipated round-Australia trip prior to returning home.

Indeed, a cursory examination of the eye-watering expenses racked up by travellers to Australia from non-agreement countries who had experienced medical misfortunes helped to bring my comparatively favourable outcome into perspective.

Prior to my paean to the Reciprocal Healthcare Agreement I had never even remotely considered I’d have such direct cause to be grateful for the assiduousness of our overseas diplomats, and on the face of it this does genuinely appear to a phenomenal deal on our part.

The coup of inclusion in the agreement is evidenced by the subtle safety net it provides for the 62,000 Irish citizens who visit Australia annually. Although this pales in comparison to the 228,000 Aussies visiting Ireland every year, tourism figures show that Irish travellers Down Under stay for twice as long on average, with our Emerald Isle typically constituting a brief pitstop on a broader continental tour for Antipodean voyagers.

That’s not to even mention the manifold dangers lurking around every corner of our adoptive land with working holidaymakers such as ourselves customarily drawn to indulging in risky outdoor pursuits, often in the company of some less-than-friendly fauna.

In my own case, I was thankful to be able to transfer my care to my employer Western Health, which meant the required follow-up hand therapy appointments were simply a matter of popping downstairs for five minutes to check up on progress, and prescribe exercises to improve strength and movement.

I’m now well and truly on the mend, with the added benefit of a fully-intact wallet.

My main concern is what to do with the gaps in my weekly diary during the post-op recovery phase in light of my forlorn footy hopes- my dreams of gracing the AFL Grand Final stage at the MCG cruelly dashed.

Well, for now at least.

Ciarán D’Arcy from Co Louth moved to Melbourne in October 2018.

It hurt not to come home for Christmas. But the skies opened again, and hope is renewed