Living in Australia: I miss people saying my name correctly

Dr Mairéad Heaney, from Galway, says it was heartbreaking leaving Ireland a second time as it was likely permanent 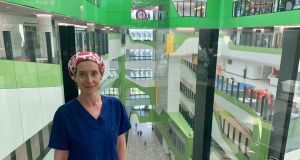 Dr Mairead Heaney is originally from Galway and is consultant anaesthetist and intensivist at Perth Children’s hospital, where this photograph was taken

Working Abroad Q&A: Each week Irish Times Abroad meets an Irish person working in an interesting job overseas. This week Dr Mairéad Heaney, who is originally from Galway but now lives in Perth, Australia, on working as a consultant anaesthetist and intensivist.

When did you leave Ireland, and why?
I finished my anaesthesia training in Ireland in 2004 and in order to equip myself for a consultant position it was necessary to go abroad for further training. Accompanied by my husband Barry and six-month old son Luke, I headed for Perth to do a two year fellowship in intensive care medicine.

Did you study in Ireland? Where?
I studied medicine at University College Galway from 1989 until 1995. I worked as an intern at Galway University Hospital and then began seven years of training in anaesthesia. I was lucky to have many inspiring mentors during anaesthesia training. One in particular, Dr Brian Marsh who works at the Mater Hospital in Dublin, had been to Perth and he helped me gain a fellowship position in Perth.

Tell us about your career in Perth?

I am currently employed as a consultant anaesthetist and intensivist at the newly-built Perth Children’s Hospital. I have worked mainly with children for the past 13 years. I also work as the Hospital Medical Director for Donate Life, which is an Australian Government agency responsible for overseeing the country’s organ donation program.

What does your day-to-day work now involve?

West Australians are different to the Irish in that they go to bed very early and get up before sunrise and exercise. I have sort of adapted to this lifestyle, although in winter I struggle to get out and exercise before work and  it’s a lot easier in summer when its bright before 5am. I try to get to the beach before work and walk my dogs.

Theatre lists generally start around 7.30am. On the days that I am not working at Perth Children’s Hospital I work in private anaesthetic practice almost exclusively caring for children. In Australia, there is ample opportunity to work in both the public and private systems. This provides a really good balance of case mix and working environments. My work in the paediatric critical care unit is interesting and rewarding. Working the day after a busy night duty, however, can be challenging!

You are Medical Director for Donate Life at Perth Children’s Hospital. What does that involve?

Donate Life was set up by the Australian government to increase public awareness, and improve medical education relating to organ donation. My role is to educate medical and nursing staff in relation to all aspects of organ donation including caring for a potential organ donor and their family. Only a very small proportion of patients who die are eligible to become an organ donor so the goal is to ensure that every potential donor is recognised, and their families are given the opportunity for that to occur.

Is it hard to talk about organ donation with children and their parents?I used to really struggle emotionally with these conversations. I felt we were asking families to give more at a time when they were facing a terrible tragedy. I have learned over time that rather than taking from these families we are giving them an opportunity to have something positive come out of something tragic. We expect compassionate conversations around organ donation to become a normal part of good end of life care.

Is your name pronounced incorrectly abroad? How do you respond?

This is the only paediatric hospital in West Australia for a population of 2.6 million people

One organ donor can save or dramatically improve up to eight lives, which is amazing. Our research found that for many bereaved families, the one thing that helped them cope with their grief was knowing that their loved one was able to become a donor and contribute to the life or quality of life of others.

Do many families discuss organ donation?

Families don’t generally talk about organ donation; it is not something that we dwell on until we are in the situation. Individuals who have discussed organ donation and make their wishes known to their loved ones are much more likely to become organ donors if the situation ever arises.

Tell us about your work at Perth Children’s hospital

I love working at Perth Children’s Hospital, which is a spectacular state of the art tertiary facility that opened in June 2018. I split my time between the paediatric critical care unit and working as an anaesthetist in theatre. This is the only paediatric hospital in West Australia for a population of 2.6 million people. As you expect from a children’s hospital, the goal is not only to provide world class clinical care but also to do so in a child-friendly environment and with intimate family involvement.

Because of its vast size (Western Australia is bigger than Europe) there are challenges in medicine that are unique to West Australia. Critically ill and injured patients in the north of the state must be transferred to Perth by the Royal Flying Doctor Service, often over distances equivalent of that between Dublin and Moscow. It can take up to 24 hours for critically ill children to reach our hospital. Western Australia also has a large Aboriginal population, many of whom live in rural and remote regions. The Aboriginal population have their own health and social challenges.

Currently Australia is experiencing its worst influenza season in 20 years. Both adult and paediatric hospitals are extremely busy, and the demands for intensive care beds higher than usual.

Healthcare in Australia is generally better resourced than Ireland although faces similar challenges with a growing and aging population.

Would you work in Ireland?

I moved back to Ireland to work as a consultant at Galway University Hospital in 2011. It was a challenging time as I had four young children and my husband remained in Australia for six months. I loved being back in Galway, loved working in the hospital despite all the challenges, and the nursing and medical staff were world class. Due to changes in the consultant contract, I was unable to undertake any private practice. My husband was unable to secure work in Galway, and after a year it was best for the family to return to Perth. It was heartbreaking leaving the day after my son’s first communion and more so for our parents who knew this time the move was most likely to be permanent.

The Irish are at home anywhere. In the medical field, Irish nurses and doctors are very much sought after and well respected.

When I first came here over 15 years ago, Perth had the tag as being great for the “newlywed and nearly dead”. That has changed a lot. The city has expanded dramatically, the population has almost doubled, and the social and restaurant scene has improved massively. Perth is a fantastic place to bring up children. A great climate, and miles and miles of Indian Ocean coastline. There are lots of parks, public barbecues, no traffic, (though Perth commuters still complain!) and good wages. Houses are expensive amd eating out is expensive. Perth is frequently cited as the most isolated capital city in the world and that is certainly true, with Bali in Indonesia being closer to Perth than to Sydney and Melbourne

There are quite a few Irish consultants in Perth working in surgery, anaesthesia and medicine. We learned after a few years here that having only Irish or English medical friends was a recipe for loneliness as many left after a year or two having finished their fellowships. Our friendship circle now is mainly through school friends of our four children. Without having family here, it is a good friendship group and provides a support network.

Is there anything you miss about living and working in Ireland?
I miss my family and friends, I miss the Irish sense of humour, I miss Irish patients and the conversations you have with them. I miss people saying my name correctly ... I have had 14 years of Morag, Maureen, Myreed, Mary, Marie etc. I miss the prom in Salthill. I miss “thanks a million and yer man and yer one”! Australia is my home now, but Ireland is where my heart is.

Green-fingered garden is to dye for
4